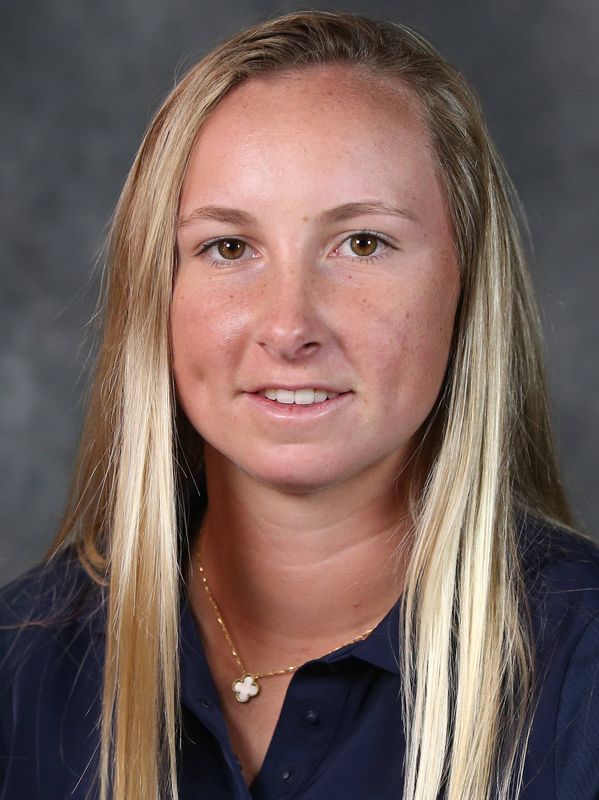 2022-23 (Junior)
• Finished the fall ranked No. 35 by Golfstat and No. 45 by Golfweek
• Opened season by helping UVA to third-place finish at ANNIKA Intercollegiate
• Was UVA’s top finisher (fifth) at Mercedes-Benz Collegiate
• Shot her best overall tourney score (206) at Mercedes-Benz Collegiate where she also matched her overall single-round best (67)
• Led UVA with a 12th-place finish at the Windy City Collegiate Classic
• Was 13th at Stanford Intercollegiate (-1/212)

2021 (Freshman)
• Played in all eight tournaments
• Was UVA’s top finisher in stroke play at ACC Championships, placing 11th (+1, 217)
• Posted low round of season (-3, 69) during final round at ACCs to help UVA advance to match play portion of the tournament
• Led UVA in scoring at the Clemson Invitational finishing 13th
• Posted her best finish at the UCF Challenge, claiming 10th place in her collegiate debut
• Had her low tourney score at UCF, shooting ever-par 216
• Best single-round effort was -2, 70 at Clemson Invitational
• Named to 2021 ACC Academic Honor Roll and All-ACC Academic team
• Named an All-America Scholar by Women’s Golf Coaches Association
• Named VaSID Rookie of the Year

Amateur / High School / Personal
• Majoring in commerce at UVA
• Finished 33rd in stroke play at 2022 U.S. Amateur
• Lost in opening round of match play (1 up) to eventual champion Saki Baba
• Was fifth in stroke play at 2022 North & South Amateur
• Recipient of the 2022-2023 Jim and Sharon Todd Bicentennial Scholars Fund
• Stroke play medalist at the 2021 Pennsylvania Women’s Amateur
• Reached the semifinals of match play at 2021 Women’s Western Amateur after finishing fifth in stroke play qualifying
• An American Junior Golf Association honorable mention All-American
• Named a Rolex All-American in 2019
• Tabbed for the AJGA Scholastic Honor Roll
• Was ranked the No. 21 player by the AJGA, No. 20 by Golfweek and stood No. 11 in her class in the Junior Golf Scoreboard rankings when she signed with UVA
• In 2019, she finished in the top-10 at seven of her eight AJGA events
• Picked up wins at the AJGA Junior at Chicopee and the Stewart Cink Championship and was the runner-up at the AJGA Junior at Southpointe
• As a 13-year-old, she competed at the 2015 USGA Girls Junior Championship and qualified for the 2018 Girls Junior PGA Championship
• Excelled in three sports at Tower Hill School outside of her junior golf career
• Was the only female competitor on the school’s 2018 national championship squash team and co-captain of the field hockey squad
• Helped Tower Hill, a co-ed team, to its fourth consecutive state golf championship in 2019
• Was a four-time all-state selection
• Participated in the AJGA Leadership Links program and raised money through direct donations or ones based on scoring birdies or eagles during tournament play
• Helped to raise more than $14,000 for the Nicklaus Children’s Health Care Foundation
• Father, Blake, attended Virginia
• Mother, Susan, swam at Bucknell
• Has two older brothers – Matthew and Rya
• Matthew also attended UVA