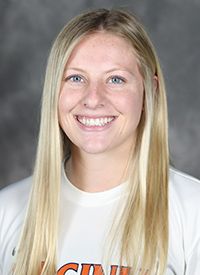 2020-21 SEASON
• Appeared in 11 matches, making five starts and logging 554 minutes
• Tallied one assist coming on the game-winning goal against No. 13 Louisville (10/15)
• Played a long of 76 minutes in that match against the Cardinals
• Drafted by the Chicago Red Stars in the fourth round of the 2021 NWSL Draft
• Graduated in December and elected to report to training camp with the Chicago Red Stars for the spring

2019 SEASON
• Saw action in all 22 matches, starting six – including the final three of the season
• Tallied five points with a goal and three assists
• Assisted on game-winning goal against Boston College (10/27)
• Also added assists against East Carolina (8/30) and No. 12 Louisville (10/24)
• Scored against Radford (11/16) in the NCAA Tournament opener
• Played a season-long 77 minutes in that match against the Highlanders
• Named to the ACC Academic Honor Roll

PERSONAL
• Alissa Marie Gorzak
• Daughter of John and Anita Gorzak
• Has an older sister, Gianna, and a younger brother, Johnny