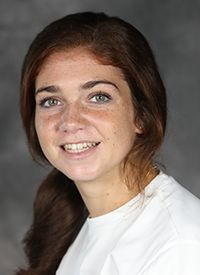 2017 (AT NORTHWESTERN)
• Started all 23 games at Northwestern as a freshman in 2017
• Helped Northwestern to 11 shutouts, the NCAA Tournament  second round and a Big 10 runner-up finish
• Scored two goals on the season, including game-winner against Wisconsin
• Scored her first goal in a win at Illinois State

PERSONAL
• Daughter of Jennifer Smith and Vincent Angotti
• Mother, Jennifer, was a three-time All-American in soccer at Cornell and 1990 Hermann Trophy finalist
• Also a 2000 inductee into the Cornell Athletics Hall of Fame
• Father, Vincent, was a three-time All-American in lacrosse at Cornell and 2001 Hall of Fame inductee
• Grandfather, Vincent Angotti, coached basketball at Towson
• Major: Economics