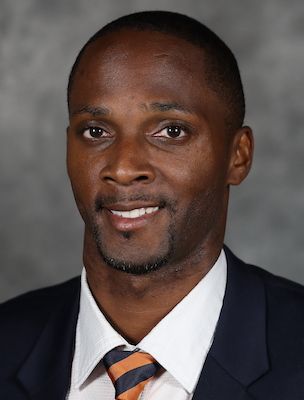 LaRon Bennett joined the Virginia program in the fall of 2021 to coach the sprints, hurdles and relays for the Cavaliers. He came to UVA after heading up the program at Belhaven University (Jackson, Miss.) from 2019 to 2021.

At Division III Bellhaven, Bennett served as the director of track and field and cross country. He managed all aspects of the program, saw the program host its first home meet and the American Southwest Conference Outdoor Championships, and was involved in the development and planning for a $1.8 million outdoor track facility. In just three seasons, his student-athletes posted 20 all-time top-10 school performances, two All-American and conference champions and seven were ranked in the top-10 national performance lists.

From 2012 to 2017, Bennett was on the staff at Drake, serving as the Bulldogs interim co-head coach in his final season in Des Moines (Iowa). During his tenure, Drake student-athletes earned nine Missouri Valley Conference (MVC) Elite 18 awards, given on the basis of the highest GPA combined with the highest event finisher at the conference meet. He coached nine student-athletes in NCAA first round competition with four MVC champions.

Bennett started his coaching path at his alma mater, Georgia, where he worked as a volunteer assistant. During his tenure with the Bulldogs he coached two SEC champions and 18 All-Americans.

While competing at Georgia, Bennett was a three-time All-American in the 400-meter hurdles (2003-2005) and team captain for one of the top squads in the country.

A native of Brunswick, Ga., Bennett earned his undergraduate degree from Georgia in child and family development and has a master’s in secondary education from the University of Phoenix. He and his wife, Kali, have a son, Malachi, and daughter, Naomi.