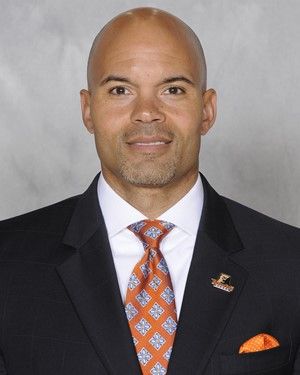 Dr. Edward Scott joined the Virginia athletics department in January of 2022 as a deputy athletics director.

Scott came to UVA after serving the previous five years as the vice president and director of athletics at Morgan State University where he was named the 2021-22 Cushman & Wakefield Athletic Director of the Year by the National Association of Collegiate Directors of Athletics (NACDA). His responsibilities at Virginia include oversight of sports medicine, strength and conditioning, nutrition, sport psychology, diversity, equity and inclusion, men’s basketball, baseball, track & field and cross country and he will help supervise football.

During his 18-plus years as an athletics administrator Scott has served as a senior associate director of athletics at George Washington and Binghamton universities while also spending time at the University of Louisville and his alma mater the University at Albany.

At Morgan, Scott oversaw the department’s 14 Division I programs with nearly 300 student-athletes who compete in the Mid-Eastern Athletic Conference (MEAC). In addition to handling the department’s day-to-day operations and oversight of recreation and intramurals for campus, Scott reported directly to President Dr. David Wilson and was the first athletics director to hold a seat on the President’s Cabinet.

Since assuming his role in October of 2016, Scott achieved unprecedented levels of success at Morgan, increasing the student-athlete graduation rate by 19 percent, improving the department grade point average to a record setting 3.41 in 2020-21 and spearheading the successful grant for the NCAA Accelerating Academic Success Program by securing nearly $900,000 for the athletic department’s academic support services.

Externally, Scott secured the largest gift in the history of Morgan athletics, a $2.7 million dollar donation to reinstate the sport of wresting for the 2023-24 season.  The donation is believed to be the largest single private donation in the history of Historically Black College and University (HBCU) athletics, making Morgan State University the only HBCU in the country to offer a Division I wrestling program starting in 2023-24.

In addition to record setting wrestling gift, Scott launched the department’s first annual fund (Morgan Bear Club), adding over 1,000 new members and donations in the first year.  He also secured a six-figure donation for naming rights to the Student-Athlete Academic Center and negotiated the university’s first-ever comprehensive 5-year apparel deal with Baltimore based Under Armour.

Improving facilities was another primary goal of Scott’s, including the renovations of the Hughes Stadium field and track, Hill Field House, Lois T. Murray softball field, the historic Hurt Gymnasium and the creation of a new student-athlete academic center. In all, during the last five years Scott oversaw an investment of approximately $25 million of ongoing improvements to Morgan’s athletic and recreational facilities.

While at George Washington, Scott continued his rapid ascension as the senior associate athletics director. As a top official in the department Scott was responsible for overseeing NCAA compliance, educational services, community and career services, student-athlete discipline and wellness, along with diversity and inclusion efforts for the department’s 27 sports and 500 student-athletes.

In addition to his oversight duties, Scott served as the sport administrator for men’s basketball, women’s soccer, softball, women’s lacrosse and men’s and women’s swimming and diving programs. With the assistance of Scott’s guidance, the Colonials’ men’s basketball team won the 2016 National Invitational Tournament (NIT), its first postseason championship in school history, and set the school record for wins (28) while the women’s soccer team captured the Atlantic 10 title.

Scott was charged with creating Binghamton’s on-site professional development program for all coaches and staff while collaborating with campus-wide departments to develop partnerships to better serve the needs of Binghamton’s student-athletes. Under his leadership, Binghamton student-athletes recorded the highest-grade point average in athletic department history several times, while placing more student-athletes on the America East Honor Roll than any school in the conference on numerous occasions.

Scott began his career at his alma mater before moving on to Louisville, where he held the role of associate director of academic services for student-athletes. At Louisville, Scott was responsible for the academic well-being of the men’s basketball, men’s tennis, and women’s volleyball programs.

Scott has been active on the university, conference, and national level throughout his career.  Currently, he is in the first year as the President of the Minority Opportunities Athletic Association (MOAA) and is in the initial year of his four-year appointment to the NCAA’s Playing Rules Oversight Panel (PROP).

The former Division I baseball student-athlete served for three years on the NCAA Baseball Selection Committee.  In addition to his service on the NCAA Baseball Selection Committee, Scott was a member of the 2016 LEAD1 Institute (formerly D1A) and a 2012 graduate of the NCAA Leadership Institute for Ethnic Minorities. He has also facilitated the NCAA’s Career in Sports Forum in 2011 and 2012.

Outside of athletics administration, Scott is an adjunct faculty member in the School of Education at the University of Washington, where he teaches a course in Intercollegiate Athletic Leadership. Additionally, Scott has co-authored a book chapter titled, ‘The Black male student-athlete experience; Past, present and future,’ while conducting research on values, identity formation, self-esteem, and the well-being of undergraduate college students.

Scott earned a master’s degree in educational administration and policy studies and a bachelor’s in psychology from Albany in 2006 and 2002, respectively. He earned his Ph.D from Binghamton University’s School of Community and Public Affairs in May of 2019. Scott and his wife, Tara, have a daughter named Tia.