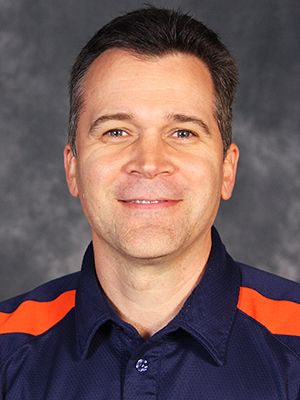 Harrison Cluff is a producer and videographer in the UVA athletics video services department. He is responsible for producing men’s and women’s soccer games in the fall and baseball games in the spring. Cluff is a also a videographer for Hoovision enhancing the fans’ experience at Scott Stadium and John Paul Jones Arena.

Cluff was recently honored with an Emmy Award nomination for a story that he shot and produced on soccer team member Chris Agorsor’s recovery from injury.

Prior to joining the UVA athletics department staff, Cluff spent seven years as a producer and videographer with Morris Communications in Augusta, Ga. During his career there he won three Telly Awards for outstanding production. Cluff worked as a news videographer at television stations in Charlottesville, Richmond, Va., and Atlanta before taking the position with Morris Communications.

He graduated from James Madison University in 1989 with a degree in communications. He and his wife, Mayira, have two children, Brittany and James Daniel, and reside in Zion Crossroads.