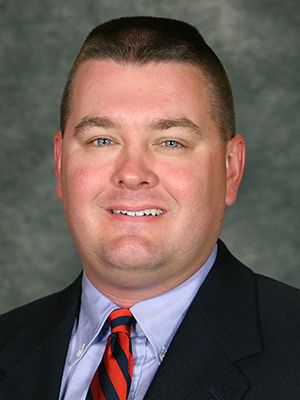 Jeff Boyer joined the Virginia training staff in 2003 as an assistant athletic trainer at the University of Virginia. In 2019 he was elevated to associate athletic trainer.A Baltimore, Md., native, Jeff came to UVA from East Carolina University, where he was an assistant athletic trainer from 2000-2003. While at ECU, he worked men’s basketball as well as oversaw the medical coverage for men’s soccer, baseball, tennis, and golf. He also was an approved clinical instructor in ECU’s undergraduate athletic training curriculum and the medical insurance coordinator for the sports medicine department. Boyer also served as the host medical coordinator for Conference USA tournament championships in baseball and cross country.

From 1997-1999, Boyer served as a graduate assistant athletic trainer at East Carolina University, working both football and baseball while also teaching First Aid and CPR classes to freshman students enrolled in Health 2126. Prior to beginning graduate school, Jeff volunteered as an athletic training intern with the Bowie Baysox, the AA affiliate of the Baltimore Orioles and during the summer of 1996, was awarded the PBATS student athletic trainer summer internship with the Baltimore Orioles of Major League Baseball.

Boyer earned his bachelor’s degree in Physical Education and Athletic Training from Salisbury State University in Salisbury, Md., in 1997. He earned his Master’s degree in Health Education from East Carolina University in 1999. He is a certified athletic trainer through the National Athletic Trainers’ Association and is a licensed athletic trainer in the state of Virginia. He holds a Certified Strength and Condition Specialist (CSCS) certification from the National Strength and Conditioning Association (NSCA) and Performance Enhancement Specialist certification along with Corrective Exercise Specialist certification from the National Academ of Sports Medicine. Jeff is also an American Red Cross First Aid, CPR, and AED instructor.

Jeff and his wife Amy have two children, Kaitlyn and Ryan.