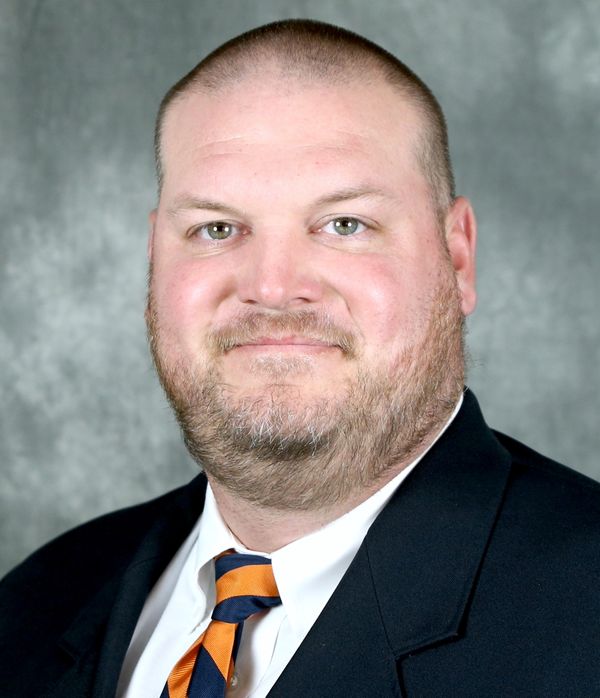 Joey Orck joined the Virginia football program in January of 2022 as an offensive analyst. He spent the previous nine seasons as an assistant coach at Presbyterian, his alma mater. Most recently, he was the Blue Hose offensive coordinator and offensive line coach.

In the spring of 2021, Orck directed an offense that ranked 20th in the FCS ranks with 257.4 passing yards per game and was 22nd in FCS with 88 percent red zone efficiency. In 2018, Orck’s first as the PC offensive coordinator saw the Blue Hose allow just five sacks, the second fewest in the Big South and the fewest allowed by PC in the Division I era.

Orck’s offensive line in 2017 surrendered only 12 sacks, second-fewest in the Big South and the second-fewest allowed by PC in its D1 history.

In 2014, Orck helped PC to a 6-5 record, the program’s first winning season since 2007 and its first-ever in the Big South. The Blue Hose earned ranked wins over No. 12 Furman and No. 22 Charleston Southern and the team’s two road wins stand as the most since three in 2007. Under Orck, the offensive line only allowed seven sacks in all Big South games, third-fewest in the conference. The line also allowed PC to rush for 1,915 yards, third-most in the Big South.

Against FCS competition, PC finished with a 5-2 record and its only two losses came to FCS playoff teams Coastal Carolina and Liberty.

Before returning to Presbyterian, Orck worked for five years at Vanderbilt, serving as a graduate assistant coach during his final three seasons after working as an offensive quality control assistant from 2008 to 2010..

At Vanderbilt he assisted the offensive line coach in all practices, including instruction, position drills and meetings.  Aside from his game-day responsibilities of identifying fronts, coverage and blitzes, he assisted heavily in the recruiting process in the Southeast and Midwest. As a quality control coach, Orck assisted with the special teams and was responsible for all offensive film breakdown and scouting.

Orck came to Vanderbilt after earning four letters as an offensive center at Presbyterian College. He also was a senior captain and helped the team win the South Atlantic Conference title and reach the NCAA D-II quarterfinals in 2005. In the spring of 2008, Orck worked as a student assistant at PC, assisting in all facets of spring practice.

Orck is married to the former Susan King. They have two children – Mary Reaves and Haynes.