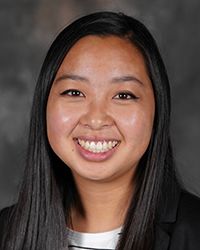 Stephanie Soh was named the multimedia and content director for the Virginia women’s basketball team in July of 2019.Soh spent over two years working in digital marketing and as the sole graphic designer for UVA Dining (Aramark) while she was an undergraduate at UVA. In this role, she managed and updated visual communications and signage for all 30 UVA Dining locations across Grounds, and was instrumental in defining UVA Dining’s marketing language and branding. She earned the Bronze Award from Aramark for excellence in work and dedication for her efforts as a graphic designer. She also worked as a graphic designer and web manager for UVA Student Engagement, developing three large-scale visual campaigns for the program. Prior to this role, Soh also worked at the Legal Aid Justice Center in Charlottesville. She was Marketing & Communications Chair for the UVA Student Council and the CRU Christian Fellowship President. Originally from Salt Lake City, Utah, Soh lived much of her life abroad in Guangzhou and Qingdao, China. Soh graduated from the University of Virginia in May of 2019, earning a bachelor’s degree in media policy & ethics and foreign affairs.