Cavaliers in the Pros

We bring you last week’s top former Cavaliers players who are currently playing in pro basketball.

#1. Jocelyn Willoughby (6’0”-F-1998, graduated ‘2020, plays pro in the WNBA) led New York Liberty to a 2-point victory against the Connecticut Sun (0-1) 81-79 in the WNBA in Saturday night’s game. She scored 13 points and grabbed 5 rebounds in 29 minutes. It was her first game for New York Liberty this season. Her team has 1-0 record this season. But this is still an early stage of the season and everything may happen. It’s Willoughby’s third year with the team.

#2. Experienced Lyndra Littles Weaver (6’1”-F/C-1987, graduated ‘2009, plays in Mexico) could not help Libertadores (2-2) in their last game on Friday. Despite Littles Weaver’s very good performance the third-placed Libertadores (2-2) was defeated 98-90 on the road by the leading Panteras in the South group. She was the top scorer with 24 points. Littles Weaver also added 7 rebounds (went 6 for 6 at the free throw line). But the season just started, so everything may happen. Littles Weaver has individually a very good year with high stats. She averages 20.8ppg, 7.8rpg, 2.8apg and 1.8spg.

#3. Ariana Moorer (5’8”-G-1991, graduated ‘2012, currently in Australia) contributed to a RedCity Roar’s victory against the 14th-ranked Seahawks (1-2) 71-67 in the Australian State League (second division) on Saturday night. She recorded 6 points and grabbed 8 rebounds in 27 minutes. RedCity Roar (1-1) is placed eighth in NBL1 North group. But the season is still in its first stage and everything can happen. Moorer has relatively good stats this year 11.5ppg, 8.5rpg, 3.0apg and 3.0spg in two games she played so far.

Other former The University of Virginia players, who play in pro basketball:

Notice: The list above includes only some of alumni playing currently in pro basketball. Check complete list of The University of Virginia basketball alumni. 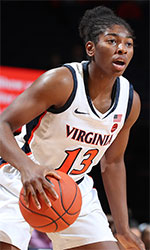