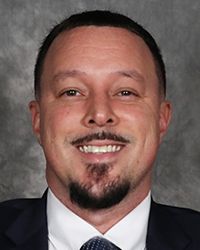 Keena Lynch joined Amaka Agugua-Hamilton’s staff in April of 2022 as the Director of Multimedia and Creative Content.

Before arriving at UVA, Lynch spent four years working at Lincoln University, a NCAA Division II school in Jefferson City, Missouri, serving as the Associate Athletic Director for External Operations and the Executive Director for the Blue Tiger Athletics Club. While at Lincoln, he worked as the liaison between the organization and the athletic department, while coordinating many of Lincoln’s external operations, including the areas of marketing, digital ticketing, promotions, budgeting and student well-being. He additionally was the point of contact for Corporate Sponsorship for Lincoln Athletics. He served as the designer and creative director for all twelve programs within the athletic department. He also was also a member of the USA Basketball Appeals Panel, which oversees the credentials and approval process of Amateur Athletic Union (AAU) basketball coaches. Lynch additionally served on the MIAA Community Culture Task Force.

Prior to returning to the realm of collegiate athletics in 2018, Lynch coached and taught at College Station High School in Texas as an Adaptive Behavior and Graphic Design teacher. He served as the school’s freshman basketball head coach and was an assistant with the varsity basketball and track & field programs. As an assistant with the track & field team, Lynch helped lead College Station to the 2017 Texas 5A District 17 title, area championship and the Region 3 runner-up, and he helped send three student-athletes to the Texas 5A State Championships.

Lynch was a member of the East Carolina men’s basketball coaching staff as a video coordinator from 2013-2016. He was the point of contact for all media needs with the program and was in charge of film exchange, self-scouting and opponent scouting. Lynch created social media graphics to increase awareness of the Pirates’ program as well as to enhance recruiting. Lynch additionally helped direct all basketball camps and clinics while overseeing and mentoring the team’s graduate assistants and student managers.