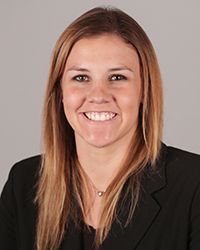 The all-time leading scorer at Michigan State, Tori Jankoska reunited with Coach Mox on the staff at Missouri State in June 2019. In three seasons with the Lady Bears, Jankoska helped the Lady Bears to a 74-15 overall record and 46-6 mark in the Missouri Valley Conference with two regular season titles and an NCAA Sweet Sixteen appearance in 2021. She helped develop players that won multiple conference honors including player of the year, defensive player of the year (twice), all-newcomer team (twice), all-defensive team (three times) and the Lady Bears had five first-team all-MVC selections.

Jankoska helped Missouri State to a No. 5 seed in the 2021 NCAA Tournament, tying the best seed in program history, and final ranking of 14th in the USA Today Coaches Poll, MSU’s best since 2001. The Lady Bears have ended each of Jankoska’s seasons ranked in the top 25 of both major polls, posted an unbeaten home season in 2019-20, and followed that by going undefeated in conference play (16-0) and on the road (11-0) for the first time in school history in 2020-21.

Jankoska, who was the ninth overall pick of the Chicago Sky in the 2017 WNBA draft and spent the 2017-18 season playing professionally for the Polish club Basket Gdynia, joined the college coaching ranks in 2018-19 as the Director of Recruiting Operations and Player Personnel at Maryland, where she helped the Terrapins to a 29-5 overall record and Big Ten regular-season title.

Jankoska earned honorable mention All-America honors from the Associated Press and Women’s Basketball Coaches Association following a spectacular senior season in East Lansing. The Freeland, Mich., native set MSU season records with 746 points and 122 3-pointers in 2016-17, added the single-game scoring record with 42 points against Ohio State, and recorded a triple-double versus Minnesota, finishing the season with averages of 22.6 points, 8.0 rebounds and 4.8 assists.

After college, Jankoska represented the United States in the World University Games in August 2017 in Taiwan, before beginning her professional career in Poland.

Jankoska earned her psychology degree from Michigan State in December 2016.