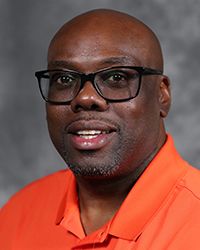 Walter Pitts was named to Tina Thompson’s coaching staff in May of 2019.

Pitts comes to Virginia after spending last season as a women’s basketball assistant coach and recruiting coordinator at Jackson State. During his tenure with the Tigers, he helped develop two All-SWAC players and the Newcomer of the Year, Kaisah Lucky.

Pitts spent the 2015-16 season as the lead assistant coach for the Texas Legends in the NBA Development League, the minor league affiliate of the Dallas Mavericks, working with a roster of NBA prospects that included D-League All-Star game selections Brandon Ashley and Michael Eric.

Before going to the Legends, Pitts spent four years on the men’s basketball coaching staff at Texas Southern. In 2014, he helped guide the Tigers to the Southwestern Athletic Conference championship, earning a bid to the NCAA Tournament for the fifth time in program history.

Pitts’ coaching career also includes being a member of the UNC Greensboro women’s basketball coaching staff, working with both the men’s and women’s programs at Wiley College, and working with two teams in the China Basketball Association.

While in high school, Pitts was awarded the State of Alabama Most Valuable Player for three consecutive years (1988-1990) and led his team to back-to-back state titles. After graduating from high school, he continued his athletic career at Tyler Junior College in Texas. During his tenure at TJC, he was named to the All-Conference Team for two successive years.

Upon returning to his home state, Pitts played at the University of Alabama and continued to build his athletic resume by receiving the Guy Lee Turner Defensive Award twice. He helped the Crimson Tide Basketball Team become major contenders by competing in the National Invitational Tournament (NIT) in 1992, and by making a National Collegiate Athletic Association (NCAA) Tournament appearance in 1993.

Pitts played professional basketball in South America. He played successfully for four years and secured a title in the South American League.

Pitts earned a Bachelor of Arts degree in Human Environmental Science from Alabama in 2008. He is the proud father of two children.