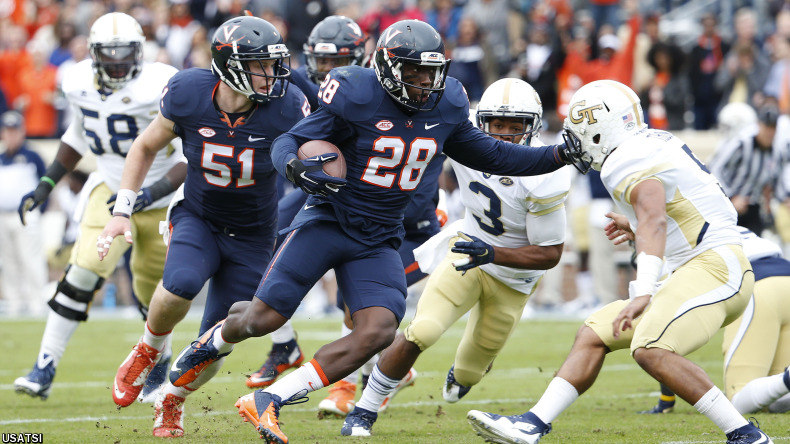 ”My nerves are shot,” Virginia’s senior wide receiver said. ”My nerves can’t take it any more.”

Severin caught a go-ahead 30-yard touchdown pass from Matt Johns and Virginia’s defense held off a late surge by Georgia Tech on Saturday night in the Cavaliers’ 27-21 victory. The victory wasn’t secured until Justin Thomas’ fourth-and-4 pass was knocked away with just over a minute to play, a fitting conclusion on a day when the Yellow Jackets managed a few big plays in their triple option, but little else.

”Except for a few plays, they didn’t really do much on us,” linebacker Micah Kiser said. ”Hopefully we keep that up.”

Daniel Hamm and Albert Reid ran for touchdowns for Virginia (3-5, 2-2 Atlantic Coast Conference), which snapped a three-game losing streak in the series. The victory kept Virginia in the running for the Coastal Division championship and its first bowl game in four years.

”It’s great when you can play a close game against a tough opponent and come out on the winning end,” said Virginia coach Mike London, whose team played a similar game against No. 9 Notre Dame earlier in the year, but lost on a 39-yard TD pass with 12 seconds left.

This time, Kiser said, ”We were just saying, `We’ve got to finish.’ We knew it was going to come down to us finishing the game.”

Georgia Tech (3-6, 1-5) lost for the sixth time in seven games, with the only victory last weekend’s 22-16 triumph against No. 17 Florida State after returning a blocked field goal for a touchdown on the game’s final play. Coach Paul Johnson’s team will have to win its final three games to extend its streak of seasons ending in a bowl to 19, a tall order with games at home against Virginia Tech and Georgia and on the road at Miami.

They’ll also have to grow up some, Johnson said, noting that with just 32,308 fans on hand, his team came out flat.

”When you’ve won three games, you shouldn’t be flat about anything,” he said.

The Yellow Jackets made it a nail-biter late, scoring on a 22-yard pass from Thomas to Clinton Lynch with 1:41 remaining, then recovering an onside kick. But after driving to the Cavaliers’ 34, Thomas threw incomplete on fourth-and-4 with 1:11 left.

Thomas finished 13 for 31 for 251 yards, and his attempts represented the most for the Yellow Jackets in Johnson’s eight years as coach.

The Cavaliers trailed 14-10 at halftime, but drove 58 yards to Ian Frye’s 24-yard field goal early in the third quarter. They needed just one play after that to get the ball back as defensive end Trent Corney caused Thomas to fumble and Kelvin Rainey recovered for Virginia.

Two plays later, Johns rolled left and hit Severin in the middle of the field. The extra point gave the Cavaliers a 20-14 lead.

Virginia dodged a bullet when Thomas missed wide-open tight end Brad Stewart for what would have been a sure touchdown, and after the Yellow Jackets punted, the Cavaliers drove 91 yards in 13 plays to open the 27-14 lead. Mizzell had a 15-yard catch and 14-yard run on the drive, Reid twice picked up short yardage on third down and finished by bursting through the middle for a 24-yard TD with 13:15 remaining.

The Yellow Jackets didn’t threaten again until the closing minutes, and then ran out of time.

Georgia Tech had 153 yards in the first half, and more than half of them came on their two scoring plays, a 49-yard run by Lynch with an option toss, and a 30-yard pass from Thomas to Lynch on a third-and-8. The play was set up by Rod Rook-Chungong’s interception of Johns and 16-yard return to the Virginia 44.

The Cavaliers used Wilfred Wahee’s fumble recovery to set up a 17-yard scoring drive for their first points. Olamide Zaccheaus ran for 12 yards to the Yellow Jackets’ 7 on the first play, and Hamm went for 6 on the next. But two runs by Reid lost a yard, and Frye kicked a 19-yard field goal.

After Lynch’s long run gave Georgia Tech a 7-3 lead, the Cavaliers went 75 yards in 10 plays to lead 10-7. Johns had completions of 18 and 17 yards in the drive, Mizzell had a 21-yard run and Hamm finished it off, taking a snap in the wildcat formation at the Yellow Jackets’ 4, faking a handoff and running it in.