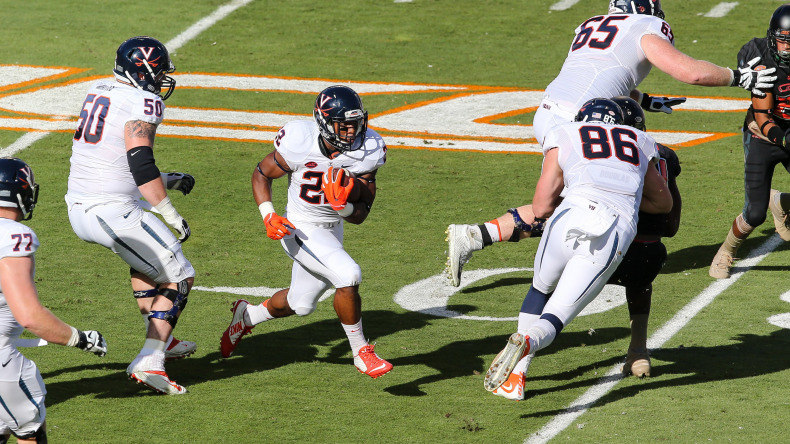 The Cavaliers had a fourth-quarter touchdown nullified by an offensive pass interference penalty, and Miami put the game away with a field goal from Michael Badgley on the ensuing drive.

Virginia’s Canaan Severin had what would have been a 4-yard score washed out when Cavaliers tight end Charlie Hopkins was flagged on the play. Hopkins didn’t make any effort to hide his frustration after the game, saying he was in “disbelief” when he saw the flag.

“That’s a play we’ve had in since fall camp,” Hopkins said. “It’s a great play… For me to get called on a pass interference on my guy, that makes no sense.”

Ian Frye kicked four field goals for the Cavaliers, including a 47-yarder that made it a six-point game with 35 seconds left. But Miami recovered the ensuing onside kick and ran out the clock.

The Cavaliers were down 14-5 in the second quarter then put together 10 unanswered points for the lead. Olamide Zaccheaus capped a six-play, 80-yard drive with a 3-yard run for score midway through the third to put the Cavaliers on top 15-14.

Miami came back with a field goal to reclaim the lead then Kaaya finding Njoku on a long catch-and-run set up the touchdown run by Walton.

David Njoku had a 5-yard touchdown catch to open the scoring and set up Mark Walton’s 1-yard fourth-quarter scoring run with a 58-yard grab for Miami (6-3, 3-2 Atlantic Coast Conference), which is bowl-eligible and still in the race for the ACC’s Coastal Division title.

The Cavaliers will face the Louisville Cardinals on November 14.