Charlottesville, Va. – Memorabilia items commemorating the Virginia men’s basketball team’s national championship and University Hall are now (June 13) on sale. UVA has partnered with Artsman to produce these collectibles for Cavalier fans and supporters. All proceeds from the sale benefit Virginia athletics.

Inventory is limited. All items are available on a first-come, first-served basis.

Artsman is offering several different items that feature pieces of the basketball court from the Minneapolis Final Four on which Virginia won the 2019 NCAA Tournament title. Several different selections are available to provide fans a variety of options.

To commemorate University Hall, the home of UVA basketball from 1965 to 2006, encased bricks from the exterior of the building are available for purchase. Additionally, display items featuring pieces of a playing court from UHall used by the Cavalier men’s and women’s basketball teams from the mid-1980s until 1997 are being sold.

Artsman is a company of craftsmen, artisans and sports enthusiasts focused on finely crafted artifacts aimed at capturing the spirit of competition, the thrill of victory and storytelling that keep memories alive for generations.

UNITED PURSUIT
UNITED PURSUIT ($27.95) chronicles the Virginia Cavaliers incredible run to the 2019 National Championship and the school’s first Final Four appearance in 35 years, providing Hoo fans with an inside look at one of the greatest seasons in school history.  ORDER HERE 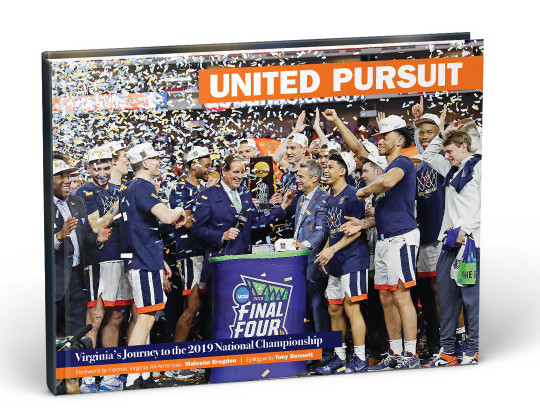