Hoos Bounce Back With Gritty Win

With the momentum swinging in NC State’s direction, University of Virginia head coach Tony Bennett urged his team to push back late Wednesday night. The Cavaliers had collapsed in the second half Saturday in Blacksburg, and the same thing was on the verge of happening in Raleigh, N.C.

“I was glad to see that we hung tough and came away with a good road victory,” said Bennett, whose record against the Wolfpack as UVA’s head coach is 14-3.

It was nearly midnight by the time their buses left the arena, but the ACC-leading Wahoos (12-3, 8-1) departed in much higher spirits than when they headed home from their previous game, a 65-51 loss to Virginia Tech. At Cassell Coliseum, the Hokies stunned the Hoos with a 19-0 run in the second half, and after that game Bennett lamented his team’s lack of grit and toughness.

“You never want your coach to call you soft, so you take that pretty personally, and we responded pretty well tonight,” UVA forward Sam Hauser said. “We were physical. Obviously, [there were] some things to clean up and work on still, but we were physical, we were tough-minded, and that’s why we came out on top tonight.”

Asked about Bennett’s reaction to the loss in Blacksburg, Murphy said, “I know for me I just took it personal, and I was like, ‘I’m gonna make sure that I can’t give him a reason to call me soft.’ We all just took it personal. Losing to Virginia Tech, that hurt us a lot, and it humbled us a little bit because we were on a roll, and we just knew we had to come out and really fight this game.” 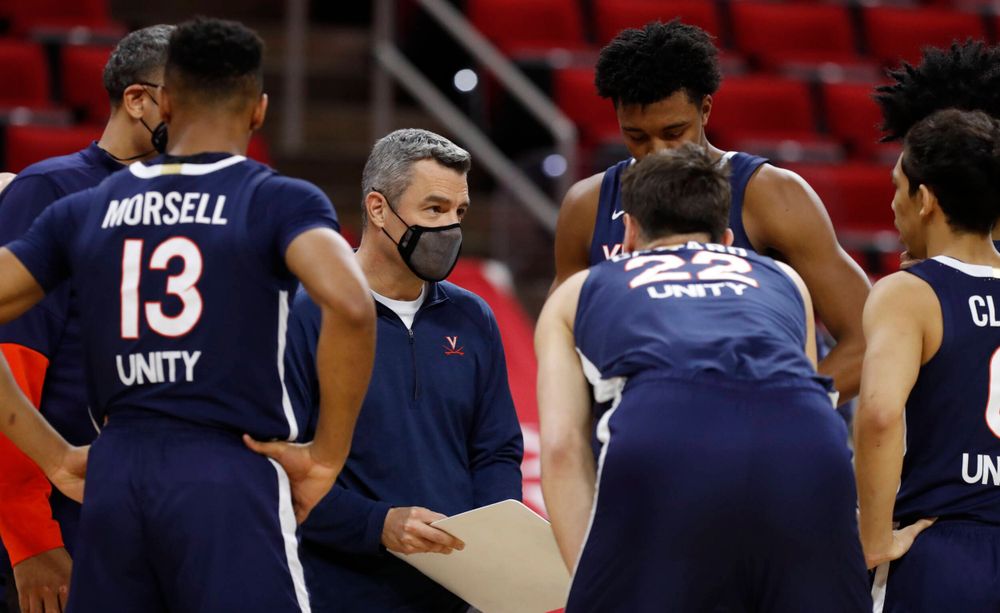 This was supposed to be the second of two regular-season games between these teams. But the first, scheduled for Jan. 20 at John Paul Jones Arena, was postponed because of COVID-19 issues within the Wolfpack’s program. That game has been rescheduled for Feb. 24 at JPJ, the ACC announced Wednesday.

The Cavaliers labored through shaky stretches in each half at PNC Arena. In the first, after a Hauser 3-pointer gave the Hoos a 19-13 lead with 10:42 to play, more than six minutes passed before they scored again. A Jay Huff trey tied the game at 22-22 and started a 9-0 run.

Virginia’s roller-coaster ride continued after intermission. With 12:27 left, junior point guard Kihei Clark’s two free throws pushed the Cavaliers’ lead to 43-34, and they appeared to be in control. But the Pack answered with a 10-0 run to take a one-point lead with 6:58 to play, and history seemed to be repeating itself for UVA. This time, though, the Hoos made a stand.

Hauser’s two free throws put Virginia up 45-44. NC State regained the lead on a jumper by Jericole Hellems, who finished with a game-high 23 points, but the Cavaliers were unfazed. Two free throws by Murphy started a 10-2 run that also included a Hauser 3-pointer, a Clark layup, a three-point play by the 7-1 Huff, and, finally, a Huff pass to Murphy for a dunk off a textbook backdoor cut.

“They had their run, and instead of folding and giving in, we responded with our own run,” Hauser said, “and that was the difference from the Blacksburg game. We definitely did a great job in that aspect in the second half.”

NC State, which lost its leading scorer, Devon Daniels, to a season-ending injury last week, outrebounded Virginia 31-24. Of the Pack’s 11 offensive rebounds, however, only three came in the second half.

“That was a bit of resiliency,” Bennett said.

Huff scored 12 points to join Hauser and Huff in double figures. A fifth-year senior who, like Murphy, grew up in Durham, Huff also had a game-high six rebounds, plus three assists and two steals. He can do even more, Bennett believes, especially at the defensive end.

“Jay’s had some good games,” Bennett said, “but I wanted him to be harder to score against on the interior and use his length.”

All of UVA’s scoring came from its starters. Clark and freshman guard Reece Beekman contributed eight points apiece. Clark, who had no assists against Virginia Tech, finished with a game-high six Wednesday night.

“We had to ride ‘em and go with ‘em,” Bennett said of his starters. “That doesn’t mean the bench won’t help at key times, because they have helped in the past. I just went with what I thought was gonna work.” 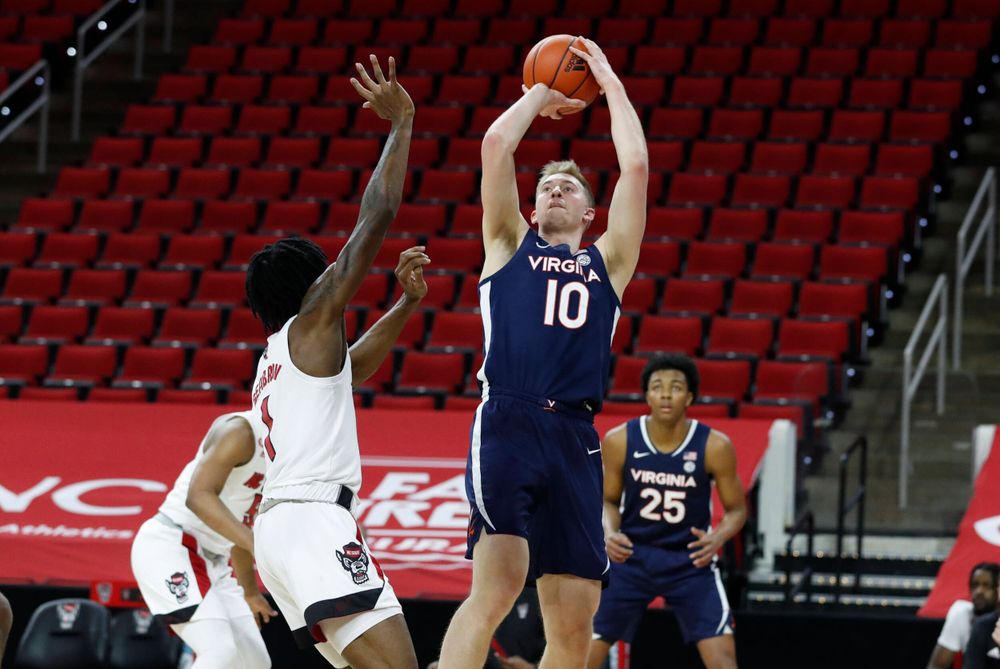 MARKSMEN: The Cavaliers have attempted 175 free throws this season, by far the fewest in the ACC. But no team in the league is more accurate than UVA, which is shooting 81.7 percent from the line.

After shooting only four free throws in the loss to Virginia Tech, UVA attempted 22 against NC State and made 20 of them. Hauser and Murphy each went 6 for 6 from the line.

“I guess that goes back to the point of being too finesse [in Blacksburg],” Hauser said. “We didn’t settle as much tonight. I think we were attacking, and our guards really did a great job in the second half of being aggressive and getting downhill and forcing the action. When you can make a lot of free throws it helps build a lead, and it helped us seal the win.”

For the season, Huff is shooting a team-high 88.5 percent from the line. Murphy is at 88 percent, sophomore guard Casey Morsell at 83.3 percent, and Hauser at 81 percent. Sophomore forward Justin McKoy has attempted only nine free throws, but he’s made eight of them (88.9 percent). Redshirt sophomore Francisco Caffaro is 5 for 6 (83.3 percent).

SOUND BITES: The victory was the Cavaliers’ ninth in their past 10 games with NC State. Among the postgame comments Wednesday night:

* Bennett: “I talked about trying not to yield. I thought we yielded a bit too much at key times against Virginia Tech, and I didn’t sense that tonight, even in the first half.”

* Murphy on playing in North Carolina: “Being back in the Hoop State is lovely, seeing a lot of familiar places. Growing up playing at State in different team camps and all, that was really fun, and it brought back a lot of memories. It was a pretty good showing, I would say.”

* Bennett on rescheduling games that have been postponed: “We’re going to try to make up the games, but [only] if they make sense. I’m not going to be pushed if they don’t make sense. No way, no how.”

* Bennett on the Wolfpack’s pressure defense, which the Hoos were able to exploit: “Virginia Tech was really good [at being] physical and taking away the lane. This team pressured to try to get turnovers, but sometimes the lane was a touch more open, so you had to make some hard drives and the right decisions off of it.”

* Murphy: “With the way they play defense, we were just taking what they give us, and when they’re overplaying like that I can get backdoor cuts and get a lot of dunks.”

* Bennett: “I liked how Reece and Kihei were aggressive. I thought that set the tone defensively.”

CHANGE-UP: UVA was scheduled to meet Louisville at JPJ on Saturday, but COVID-19 issues in the Cardinals’ program forced that game to be postponed.

The Cavaliers are still playing Saturday at JPJ, but their opponent will be Pittsburgh, not Louisville, the ACC announced Wednesday afternoon. In a game to be televised on ESPN, UVA (12-3, 8-1) meets Pitt (9-5, 5-4) at 4 p.m.

The Hoos have won five straight over Pitt and lead the series 16-4.

“Obviously, they just came off a big win tonight,” Hauser said, “so we’ve got our hands full again on Saturday.”