Dockters Are All In for UVA Tennis

CHARLOTTESVILLE –– Not for nothing is his given name Jefferson.

His parents, Scott and Sally Dockter, are University of Virginia graduates (Class of ’89) who remain passionate about their alma mater. Jefferson Dockter‘s three siblings––Jack, Kathryn and Sarah––are UVA alumni, too, and he’ll join their ranks next month.

“We’re die-hard,” said the youngest Dockter, an American studies major. “We bleed orange and blue, and it’s been that way forever.”

Asked about the Dockters, UVA director of tennis Andres Pedroso marveled at their commitment.

“They’re all in,” Pedroso said, “and they’ve been all in for many, years.”

Scott Dockter played on the Virginia tennis team as an undergraduate. Jefferson Dockter plays for the Cavaliers now, and the family will remain part of the program long after he moves on, as a visit to the new Virginia Tennis Facility at the Boar’s Head Sport Club makes clear.

At one end of the six outdoor courts is a scoreboard believed to be the largest in college tennis. It’s named for the Dockters and reflects the family’s generosity.

For Jefferson, looking up during practices and matches and seeing Dockter Family Scoreboard in huge letters took some getting used to at first, but he’s proud of the gift.

“Honestly, it’s an honor for us to see our family name up there,” he said.

“I do not see my name on the scoreboard being a reflection of anything I’ve achieved. Rather, I see it as something my dad has done for all of us, my whole family. I was fortunate to be born with such amazing parents, and it’s a testament to them that the scoreboard exists and that I am affiliated with Virginia tennis at all. I’m very grateful.”

Jack Dockter, a 2013 graduate, was on the swim team at UVA for one season. Kathryn, who graduated in 2016, spent two years as a student-manager on the men’s tennis team when its head coach was Brian Boland, Pedroso’s predecessor. Under Boland, the Wahoos won NCAA team titles in 2013, ’15, ’16 and ’17.

Sarah graduated in 2018. She overlapped at UVA for one year with Jefferson, who enrolled in 2017 after graduating from Marist School in the Atlanta area.

“UVA has done so much for us,” said Scott Dockter, the chief executive officer at PDB Worldwide. “It’s meant the world to us to be affiliated with UVA, and to have the experience we had and the ability to give back in a small way. And also to give back to my family who supported me and gave me the chance to come from Columbus, Ohio, to UVA. At the time, being able to afford that wasn’t a sure thing. It’s as much a tribute to my parents and my family as it is my current family.”

Scott Dockter spent 11 years on the Virginia Athletics Foundation’s board of trustees, including two as president. When he was a UVA undergraduate, the tennis team played near the train tracks on ancient courts not far from University Hall and the Cage, structures that have since been torn down.

“We used to call them grass courts, because there was so much grass that grew between the cracks,” Dockter recalled, laughing.

In the late ‘90s, the men’s and women’s programs moved to the Sheridan Snyder Tennis Center next to Memorial Gymnasium. The Cavaliers’ indoor courts, however, were at the Boar’s Head, next to the McArthur Squash Center, and that posed logistical challenges for players and coaches, whose offices are in McCue Center.

With the opening this year of the Virginia Tennis Facility at the Boar’s Head, the programs no longer have to bounce from site to site, depending on the weather. The facility includes six outdoor courts and, when COVID-19 protocols are not in place, seating for 450 fans.

As with basketball games at John Paul Jones Arena and football games at Scott Stadium, “you want to make sure that it’s a great experience for fans,” Dockter said, “and I think that’s what tennis will provide.”

He laughed. “We used to love the Snyder scoreboard, because it felt like Wrigley Field, but the problem was, at Wrigley Field at least the lights stayed on. So as great and fun as that was, this is just a whole different experience.”

Dockter said the family, working with Pedroso, head women’s coach Sara O’Leary and VAF executive director Dirk Katstra, wanted to create “an experience for the fans that’s different than most tennis facilities, and to be able to showcase our men and women and do it in a different way and to have the best and the biggest scoreboard in the country. We just wanted to put an exclamation point on it.”

Jefferson has been around the men’s program for years. When he was growing up, the Dockter family would support the team whenever the Hoos came to Atlanta to play Georgia Tech, and Jefferson remembers watching such former greats as Houston Barrick, Sanam Singh and Somdev Devvarman.

“I think I was 11 when I first started watching UVA matches,” he said.

And now he’s part of a team that, with two regular-season matches remaining, is ranked No. 4 nationally. The ACC tournament starts April 21 in Rome, Ga.

His experience in the program has “been incredible,” Jefferson said. “It’s been everything that I ever could have wanted it to be, and more … The journey has been incredible, and now to have been a part of this team that we have this year, this is by far the most special team I’ve ever been a part of.”

That Jefferson has displayed a selfless attitude throughout his time in the program does not surprise his head coach.

“He’s like Sally and Scott,” Pedroso said. “It’s always about the team for them.” 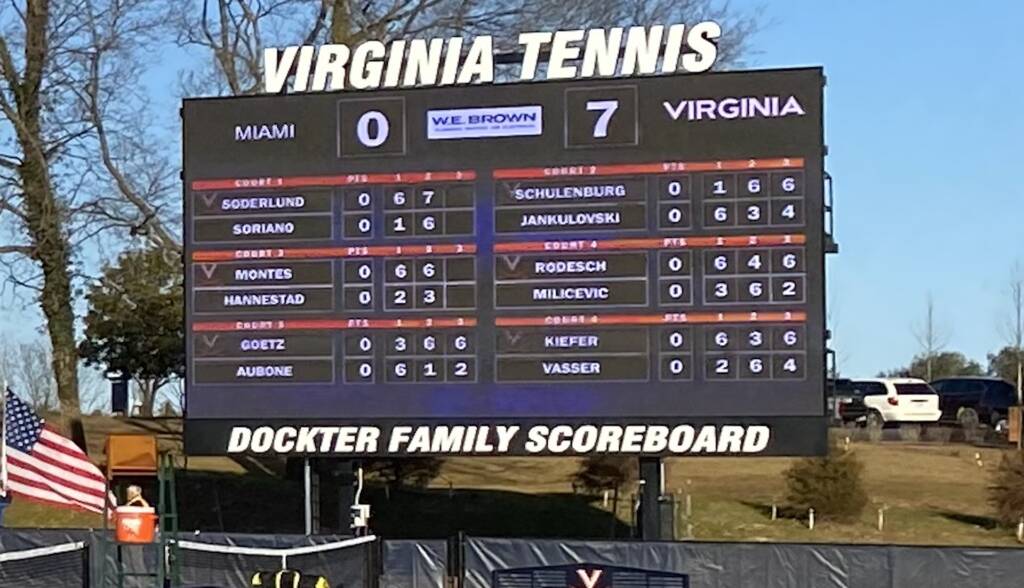 No. 5 Virginia Closes Regular Season at Notre Dame and Louisville