CHARLOTTESVILLE –– His four years on Grounds passed in a blur, and Logan Carrington feels a tinge of regret about that. If he could do it again, he would cut back on some of the countless extracurricular activities with which he was involved at the University of Virginia.

“I think one thing I did not do when I was in college was really enjoy it. I was so busy,” said Carrington, who graduated from UVA in 2018 with a bachelor’s degree in media studies.

“It’s like I was going from 5 o’clock in the morning at practice, and then I had class from 8 to 10. I had one internship from 11 to 12, class again, another internship, then practice. Then treatment. And then it’s, ‘OK, the day’s over.’

“Fast-forward four years. That was really my life every day until I graduated. So I didn’t get a chance to really enjoy being in that space.” 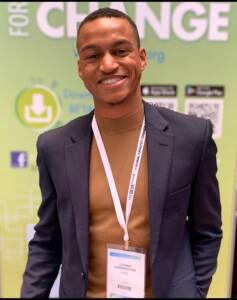 Carrington is now a product marketing manager for NetApp, a company that provides cloud data services and data management. His schedule remains full, but he’s trying to slow down occasionally. He’s started keeping a journal in which he writes down “key elements of my month,” Carrington said, “basically what have I accomplished, what my goals are for this week, this month, this year, and how far away am I from actually getting there.”

Carrington, who ran the 400 and 800 meters and on the 4×400 relay team at UVA, grew up in Northern Virginia and attended Tuscarora High School in Leesburg. When the Cavaliers began recruiting Carrington, he wasn’t a tough sell.

His father, Kevin, ran track at UVA, from which he graduated in 1983, and Carrington has other relatives who attended Virginia, including an uncle, Mike Owens, who played basketball for head coach Terry Holland.

Carrington has two siblings, sisters Sela and Kya, and they followed him to Charlottesville. Sela graduated from UVA’s Frank Batten School of Leadership and Public Policy this spring and lived on the Lawn as a fourth-year student. Kya is in her third year at the University.

He arrived at UVA in 2014, Carrington said, determined “to be more than a student-athlete. So when I got to Grounds that first year, I joined some organizations.”

That’s something of an understatement. Carrington’s pace rarely slowed during his four years in Charlottesville. At various times, he served as vice president of the Media Studies Society; co-hosted a talk show, titled “The Hoo,” in which he interviewed members of the track & field program at John Paul Jones Arena; held internships with the Virginia Athletics Foundation and Virginia Sports Properties; served as vice president of Student-Athletes Committed to Honor; served on the Student-Athlete Advisory Committee (SAAC) and Student Athlete Mentors (SAM) governing boards; created a mentorship program for the SAAC and SAM councils; and volunteered as an Office of African-American Affairs peer advisor.

“My day to day was pretty slammed, looking back on it,” Carrington said, “but I think every experience gave me the ability to really understand areas I liked in terms of media technology. Broadcasting was always my dream, but I realized the trajectory to get on to ESPN, like Stuart Scott or Stephen A. Smith, or any of those other individuals we see every day, is very difficult, and I personally didn’t want to go to a really small market and then have it either not work out or have to rely on parental help from a financial standpoint.” 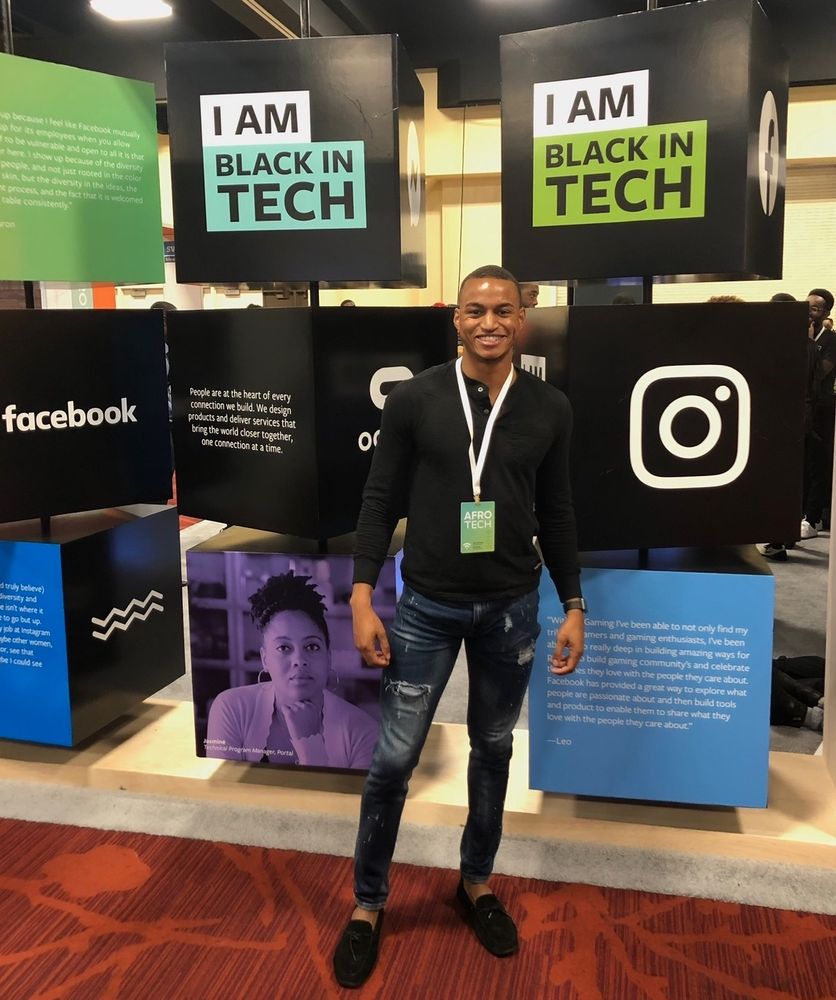 By the time he reached his third year at UVA, Carrington said, he’d realized he wasn’t going to run track professionally. He began exploring other career options.

And so, after graduating from UVA, he accepted a job with Oracle, a computer technology company. He moved to the Boston area and worked in sales for little more than a year, then took a position with NetApp.

Carrington moved to the Bay Area in the fall of 2020 and stayed there until this year, when he relocated to Washington, D.C., where he works remotely, providing marketing enablement for Oracle, SAP and SQL products.

Initially, Carrington said, “my job as a product marketing manager was more enablement, so quick reference guides, PowerPoint presentations, solution briefs, etc. But then [NetApp management] realized that I had a background in media.”

At UVA, he’d learned “how to record video content and how to build out stories,” Carrington said, “and that was an area I wanted to bring to my actual job.”

At NetApp’s Insight 2020 global conference, Carrington gave a keynote speech and drew on his track background for inspiration. It was titled “Don’t Run Your Enterprise Applications Into the Ground,” and Carrington said he talked about how having “a data baton can power you across the finish line first, using Oracle, SQL and SAP workloads to push you around the track before your competitors.”

He’s launched a show called “Not Top 5” that highlights what his company’s “competitors are not doing in the marketplace,” Carrington said, “from workload configurations to systems to prices to strategies, and kind of highlights from a top-down perspective what NetApp is doing on the back end compared to our competitors.” 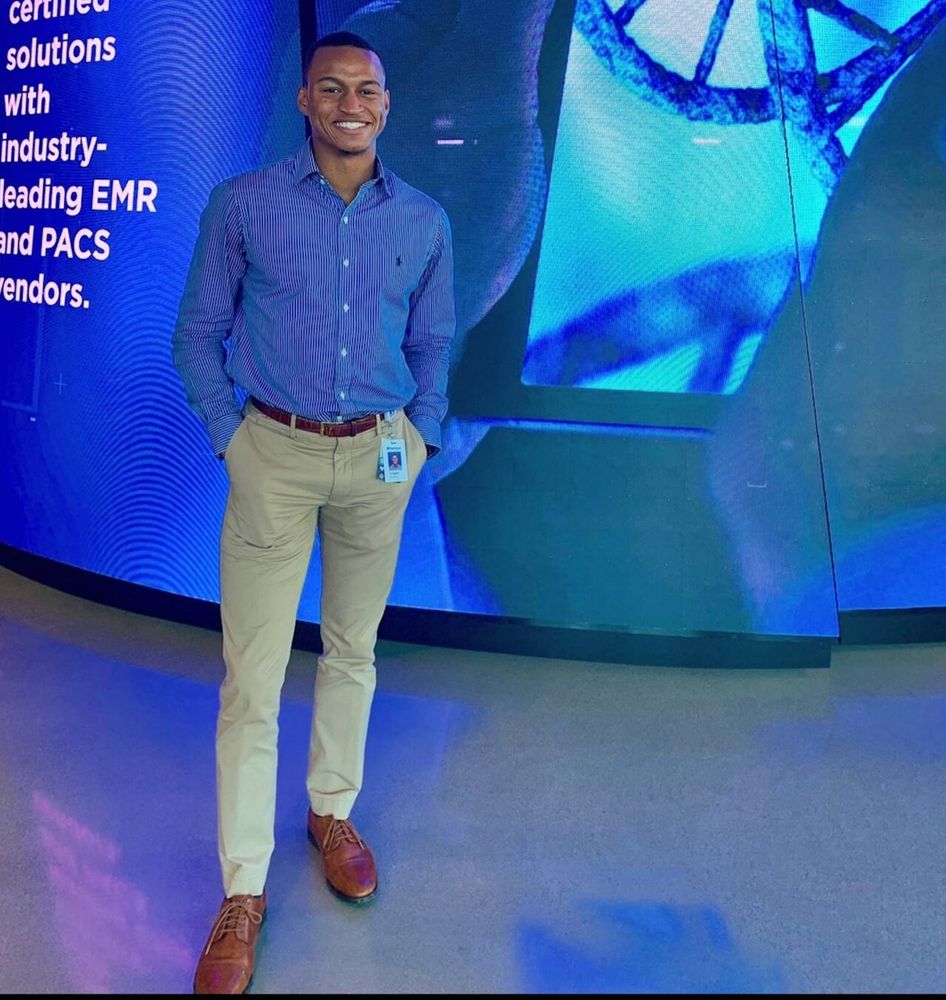 In D.C., Carrington lives in the Navy Yard neighborhood near Nationals Park and Audi Field. Most of his NetApp team is on the West Coast, he said, so his work “days do end later, depending on the deliverables we have to work on, but all in all everything’s been pretty good. I’m loving being home. I miss California every day, but I’m near my family and friends, and I can go down to UVA whenever I want to now.”

He’s still fit. Carrington worked as a personal trainer with Bounce Bay Area in California, and he’s joined DC Run Crew. He’s training for a 5-kilometer race with 20 obstacles that will be held Sept. 11 at Nationals Park.

“It’s kind of fun now,” Carrington said. “A lot of my former teammates have mentioned to me that, since we’re not doing it every day, [training is] something that you can actually really enjoy. Instead of waking up at 4 or 5 in the morning and going for a run at Panorama Farms or working out, now it’s like, ‘OK, I can go out at 6 in the morning, which is still early by most people’s standards, to jump start my day and get some clarity in regards to whatever I’m doing.’

“I enjoy it. I miss competing, obviously, but I like this newfound sense of responsibility when it comes to figuring out who Logan Carrington is as a person outside of Logan Carrington the UVA student-athlete, so it’s been a blessing.”

His college experience has served him well in the working world.

“I think the biggest thing that I learned from being a student-athlete, and also being in school at UVA, is that your network will really help you when it comes to future opportunities, and also just having people in your back pocket,” Carrington said.

“For example, when I was looking for jobs, I just reached out to UVA alumni from a lot of different organizations and companies, and I got interviews, and I’d been struggling for months or weeks or years when it came to submitting applications for jobs and hearing back from people. It allowed me to realize we are a really inclusive group of people: current students, former students, former people on the team, current people on the team. If you go to UVA, you have an instant connection with people that I had never experienced in any other element of my life up to this point.”

Moreover, Carrington said, “being in a fast-paced environment, it taught me how to keep rolling with the punches and not allow one thing to derail me. In the real world that could be presentations, it could be external or internal stresses, but finding a way to keep pushing and finding an outlet has allowed me to keep going.”

At some point, Carrington said, he may go back to school to pursue an MBA, and he’d eventually like “to own my company in the fitness/nutrition space. I’m really passionate about helping other people when it comes to that. I don’t necessarily just want to be a trainer. I don’t want to be an influencer. I want to be able to create a solution or a product that puts people in a position where, regardless of how they physically look, they’re still fit in relation to their various needs from a nutritional element and from a fitness standpoint. I want to find exercises or communities that push them and inspire them.”

For now, though, Carrington is thrilled to have “a job that I love with a company that supports me and loves me, and a role that allows me to showcase my different interests from a creative standpoint.”