CHARLOTTESVILLE — For the University of Virginia men’s tennis team, the road to the program’s fifth NCAA championship went through more than a few obstacles. Over a two-week stretch in February, UVA lost five straight matches: to Ohio State, Baylor, TCU (twice) and Florida.

All of those opponents were ranked in the top five nationally, and the Cavaliers knew February defeats were not necessarily crippling.

“We understood that you can still win a national championship if you lose early on, and the goal has always been to peak in May,” Gianni Ross said Tuesday. “The problem was, we were losing a lot. Five is a lot of matches for a Virginia tennis team, especially against a bunch of teams that we were going to meet later on, for sure.”

The loss at Ohio State, which won 4-0 in Columbus, was especially troubling.

“It was a huge wakeup call for our guys,” UVA head coach Andres Pedroso said Tuesday, “and on the six-hour bus ride back we had some really honest conversations, player to player, player to coach, coaches to coaches, and just kind of reassessed the way we train, the way we compete, and the way we prepare overall.”

Ross said: “It’s hard to beat Ohio State at their home, but it doesn’t matter. We’re a good enough team to be able to win, and for us to get blown out that badly [stung].”

The loss was the turning point of the season, Pedroso believes. Two days later, back in Charlottesville, the team “had the best practice I’ve ever been a part of at UVA,” he said.

It would be a while before the Wahoos won again, but Pedroso and associate head coach Scott Brown saw encouraging signs along the way.

On a swing through Texas, UVA lost 4-2 to Baylor in Waco and 4-1 to TCU in Fort Worth. “After each of those losses, I said, ‘Scott, that was better,’ ” Pedroso recalled. To the players, Pedroso said, “I was like, ‘Guys, I’m telling you, our time is going to come. You gotta believe me.’ ”

At the ITA National Team Indoors in Seattle, the Hoos fell 4-2 to TCU and 4-2 to reigning NCAA champion Florida, but each match was close, and Pedroso loved his players’ competitive spirit. Virginia bounced back from the loss to Florida to blank Washington 4-0 in Seattle, “and it just kept going,” Pedroso said.

Still, there were other pivotal moments. The morning after UVA struggled to defeat Florida State 4-2 in Tallahasssee on April 8, Pedroso recalled, “I said, ‘Guys, we won, but that’s as close to a loss as you’re going to get from a win. So, I’m telling you, if you guys want to do something special, what happened yesterday, we’ve got to improve on it.’ ” 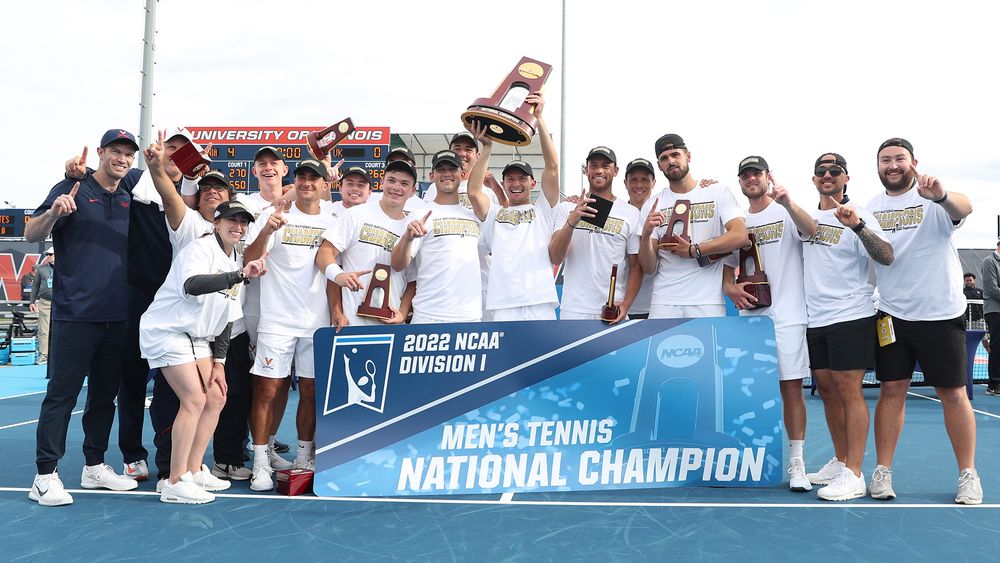 The ACC champion Cavaliers (28-5) closed the season on a 23-match winning streak. The last six of those victories came in the NCAA tournament, which UVA entered as the No. 7 seed. TCU was seeded No. 1, Florida was No. 2, Baylor was No. 3, and Ohio State was No. 4.

“When the tournament began, I stole a line from [UVA head football coach] Tony Elliott that I heard in one of his podcasts,” Pedroso said. “He said he tells his players that to be a champion you have to beat a champion. I told the guys that and said, ‘We have the defending national champions in the quarterfinals. So, if you guys want to be champions, we’re going to have to beat the Gators.’

“And so we were looking ahead, and I rarely do that, but I felt like it was important for them to focus on that match and prepare themselves during the first three rounds.”

After defeating Fairleigh Dickinson, VCU and No. 10 seed South Carolina in Charlottesville, the Hoos flew to Champaign, Ill., where, as predicted, they met No. 2 seed Florida in the NCAA quarterfinals. The Cavaliers won the rematch 4-1, after which it was clear that they’d expected to do so.

Ross said: “We knew that rushing the court does not make a statement. We knew that it shows that you’re celebrating a bit early, and it also can take away from your game the next day if you’ve already celebrated.”

In a March 31 match in Lexington, Ky., the Cavaliers defeated the Wildcats 4-2, and they dominated on Sunday. Ross, a fifth-year senior, won 6-4, 6-4 at No. 5 singles, a victory that clinched the title for UVA.

“I’m probably gonna talk about it for the rest of my life,” he said, smiling, “and I’m going to hold it over all of my teammates’ heads.”

It's 🔝 Play Tuesday presented by @WellsFargo. There could only be one top play this week: @UVAMensTennis clinching the national championship!

Pedroso was associate head coach in 2013 when UVA finished unbeaten and won its first NCAA title, also in Champaign. In each of the previous two seasons, the Cavaliers had lost to Southern California in the final, and there was considerable pressure on them in ‘13, Pedroso recalled. “The target was on our back. We were supposed to win. We expected to win, and it was just a matter of executing.”

Under head coach Brian Boland, the Hoos also captured NCAA titles in 2015, ‘16 and ‘17. Coming into this year’s tournament, Pedroso said, “I really didn’t know what to expect. We have three sophomores playing 1, 2 and 3 [in singles], and it’s a lot of responsibility for those young guys at the top of the lineup.

“I knew we had a chance, but in 2013 I said, ‘We need to win this.’ And this year I was taking it a match at a time, especially starting with the Gators in the quarters.”

That matchup “really forced us to kind of elevate everything that we do,” Pedroso said. And now the Hoos are back atop the NCAA.

“I knew we were gonna win a championship,” Ross said. “I just didn’t know when.” 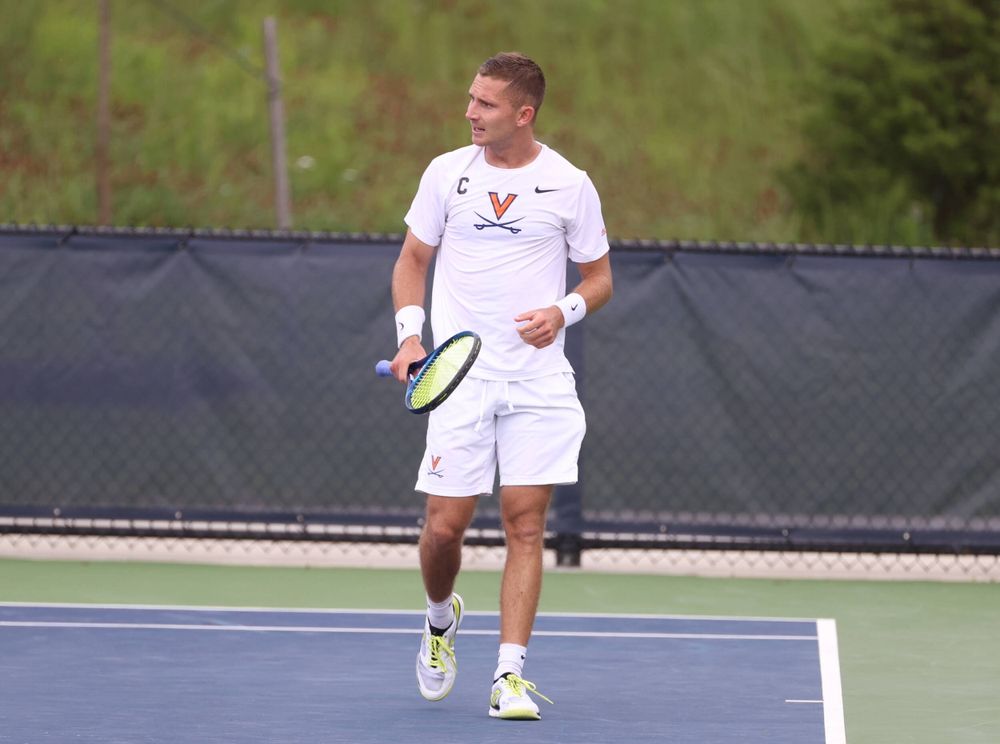 Ross, who grew up in Chicago, was the first player to commit to UVA after Pedroso was hired in 2017.

“He was a top-10 junior in the world at that time,” Pedroso said, “and he was probably the only [junior] in the top 10 or 20 in the world that was interested in college and was still considering going to college.

“So he was my first phone call. I remember I called him two or three days into the job, and he took a little while to respond, so I was like, ‘Jeez, maybe he’s not interested in Virginia. Maybe he’s still thinking about playing pro.’ ”

Pedroso learned differently during a date with his wife, Erika, in Delray Beach, Fla. They were eating dinner at a restaurant when Pedroso’s phone rang around 8:30 p.m.

“I said, ‘Erika, this is the best recruit in the world right now. I gotta take this.’ So I left dinner and I went to the back of this restaurant, it was an alley right off Atlantic Avenue, and we had an unbelievable half-hour conversation. That’s where it started. I worked really hard to get him to Virginia. He had an amazing visit, fell in love with the place, and it’s a great story that he’s the one that clinched the national championship.”

Ross was named the NCAA tournament’s Most Outstanding Player. He said Sunday evening that he wasn’t exactly sure why the award went to him, “but I’m very grateful for it.”

He smiled. “And I’m also gonna hold that over my teammates’ heads. So this is really fun. It’s turning out to be my day.”

From a team whose captains were Ross and Jefferson Dockter, only Ross and Jackson Allen will not be back next season, Pedroso said. Ross, who graduated with a bachelor’s degree in psychology, is leaving to pursue a career in pro tennis, but he’s confident the Cavaliers’ trophy collection will continue to grow in the coming years.

In the championship match Sunday, UVA’s singles lineup consisted of sophomore Chris Rodesch at No. 1, sophomore Inaki Montes at No. 2, Jeffrey von der Schulenburg at No. 3, senior Ryan Goetz at No. 4, Ross at No. 5, and graduate student Bar Botzer at No. 6. All were named to the all-tournament team in Champaign.

The Cavaliers’ double lineups Sunday were Botzer and Rodesch at No. 1, Goetz and Montes at No. 2, and Ross and von der Schulenburg at No. 3.

So the nucleus of another stellar team is already on Grounds, “and we’ve got some great [recruits] coming in the fall,” Pedroso said.

“The University of Virginia is an easy place to sell, because of everything that it represents and how beautiful it is and the academic reputation and the winning tradition that thankfully this program has been able to build over the last 20, 25 years. So recruiting is something that I think we should feel good about.”