Basketball is Back and JPJ is Jumping

CHARLOTTESVILLE — They cleared the arena between games, so it wasn’t a true doubleheader. But four hours of basketball were played Monday night at John Paul Jones Arena, and they produced two season-opening victories for the University of Virginia.

In a game that started at 5 p.m., the UVA women dominated the second half and ran away to an 85-59 win over George Washington.

At 9 p.m., the UVA men tipped off against North Carolina Central University. There were some anxious moments for the Cavaliers in the second half, but they pulled themselves together and pulled away for a 73-61 victory in front of a spirited crowd of 13,238.

Virginia’s fall teams are still competing, but hoops season has arrived, and with it comes optimism for both programs. The enthusiasm at JPJ was palpable Monday night.

“Thank you to all our fans that came to the game,” said head coach Amaka Agugua-Hamilton, who’s in her first year with the women’s team. “That was a really good crowd. We hope to continue to build on that, but there was definitely energy in the building, and we fed off of that.”

Amped-up crowds and big wins are nothing new, of course, for the Virginia men, who are in their 14thseason under head coach Tony Bennett. Under Bennett, the Wahoos have become perennial powers in the ACC, and they’ve advanced to the NCAA tournament eight times, winning a national championship in 2018-19. (They would have played in the NCAAs in 2019-20, too, had the COVID-19 pandemic not forced the cancellation of the tournament.)

The women’s program has not been as stable or successful during that span.

In 2009-10, Bennett’s first season at UVA, Hall of Fame coach Debbie Ryan led the women’s team to the NCAA tournament. But the Hoos did not get back to the NCAAs until 2017-18, their seventh and final season under Ryan’s successor, Joanne Boyle.

After Boyle retired, Tina Thompson posted a 30-63 record in four seasons as Virginia’s head coach. Thompson’s tenure ended in March, and UVA turned to Agugua-Hamilton, who arrived with an impressive résume.

In three seasons under Agugua-Hamilton, who goes by “Coach Mox,” Missouri State went 74-15. If not for the pandemic, the Lady Bears would have advanced to the NCAA tournament in each of those seasons. They reached the Sweet Sixteen in 2020-21.

Their offices aren’t far apart in JPJ, and Bennett and Agugua-Hamilton have forged a friendship and studied each other’s coaching styles.

“We text back and forth at different times,” Bennett said Monday, “and I’ve had a handful of opportunities to stop and watch a portion of their practice. I just love the spirit and the energy. They’re trying to establish a toughness. They’ve brought in some excellent players. They’ve committed some high-level young kids, and they’re really enthused about what can happen here.

“You see that. They have a plan, and they’re really working that plan and coaching the young ladies hard and well.”

Bennett’s sister Kathi is a former head coach of several women’s programs, including Indiana, Evansville and Northern Illinois. “So he has a great respect for women’s basketball,” Agugua-Hamilton said.

She’s sat in on UVA men’s practices, Agugua-Hamilton said, and picked up “little nuggets here and there. Of course, that’s been amazing.”

Basketball aside, though, “I think he is one of the most amazing people I’ve ever met,” Agugua-Hamilton of Bennett, “and just his approach to life and an approach to growing and impacting the next generation is really admirable.”

The UVA men, whose record under Bennett is 317-117, are coming off an uncharacteristic season. For the first time in nearly a decade, Virginia missed the NCAA tournament. The Hoos gained valuable experience in three NIT games, though, and they returned their top six scorers from 2021-22: forward Jayden Gardner, guards Armaan Franklin, Kihei Clark and Reece Beekman, and post players Kadin Shedrick and Francisco Caffaro.

“We do have some more options this year,” Bennett said.

Against NCCU, eight players logged at least 10 minutes apiece for the Cavaliers, including McKneely, the only freshman to see time. The Eagles, who trailed by eight at halftime, rallied to take a 44-43 lead with 14:17 remaining, at which point “I heard some nervous energy from the fans in the crowd,” NCCU head coach LeVelle Moton said.

Those nerves didn’t last. The Hoos answered with a 10-2 run that started with a Clark 3-pointer, and they didn’t falter thereafter.

When the Eagles went ahead, Shedrick said, part “of me was just hoping this wasn’t last year all over again. We all just realized we had to lock in at that moment and we couldn’t let them continue to build momentum. The crowd stayed in it, which we all really appreciated, and we stayed in it too. We played hard and we were able to pull away, which was really good. I’m not sure if last year’s team would’ve been able to do that early in the season, so that’s an area where we’ve improved.”

Franklin, whose 3-point shooting carried the Cavaliers in the NIT, hasn’t cooled off. He was 4 for 7 from beyond the arc against NCCU and finished with a game-high 21 points.

“We had some breakdowns in our defensive coverage,” Moton said, “and Franklin really made us pay.”

Coming off a season in which they shot only 32.3 percent from 3-point range, the Cavaliers were 11 for 25 (44 percent) on Monday night.

“There’s gonna be games sometimes where the shots are not going in, so you got to find other ways,” Bennett said. “But last year was a challenge … I don’t know if we’re a great outside shooting team, but we’re better, and we have more depth, and those are two important things.” 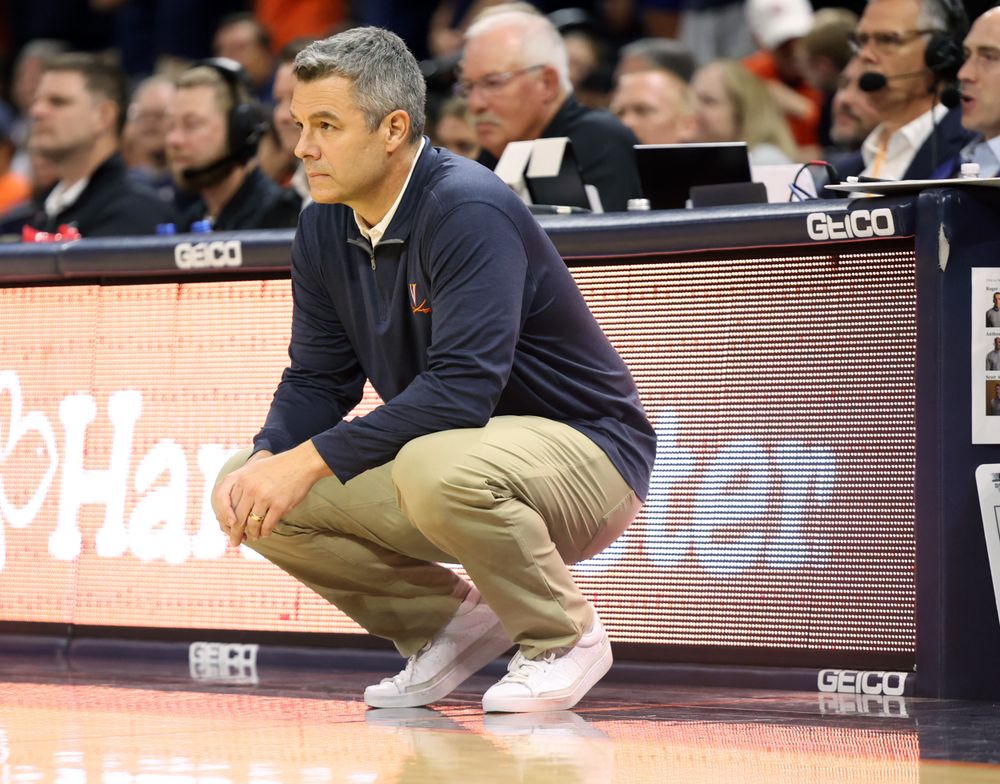 In the women’s game, the Cavaliers went into halftime down 34-30 after a second quarter in which they made only 3 of 17 shots from the floor, and few at JPJ would have predicted what was to come in the final 20 minutes.

UVA outscored the Colonials 24-16 in the third quarter and 31-9 in the fourth to open the Coach Mox Era with a flourish. Among those savoring the second-half turnaround was Jason Williford, associate head coach of the men’s team, who watched from a seat near the visitors’ bench.

“Learning how to win is when you hit that adversity, let’s come together, let’s not go separate ways and have everybody try to be the hero and do it on their own,” Agugua-Hamilton said. “Let’s just stick to the game plan, one possession at a time, and get the lead back and then keep pushing. So I thought we did that.”

As the final seconds ticked off the scoreboard clock, Agugua-Hamilton walked along the Cavaliers’ bench, high-fiving players and staffers, and then exhorted the fans, most of whom were on their feet cheering.

“I was really proud of our players,” said Agugua-Hamilton, who wants her team to push the pace at every opportunity. “We had foul trouble early, and we were a little out of rhythm, and for them to continue to believe in me, in themselves, in each other was just something I was proud of. So I just wanted to go down and tell everybody, ‘Good job.’ The energy in the building was really cool. Fans were standing up cheering, I think we all had some chills with that. It was just a great atmosphere.”

For Brunelle, who grew up in nearby Greene County, the game marked her debut as a Cavalier. She transferred to UVA this summer after graduating from Notre Dame.

“It’s kind of crazy,” Brunelle said. “Like in warmups, I’ll look to the left or I’ll look to the right and I’ll probably see someone I’m related to, which is pretty cool. I haven’t seen that since high school or since my freshman year when we played here and I was at Notre Dame. It’s still surreal, though. I never would have had imagined having the opportunity to be able to come back home in the first place and to have that opportunity to play in front of these people. I’m just really blessed and honored, and especially [to be] doing that with my teammates, because they’re amazing. I wouldn’t want to be anywhere else right now.”

Neither would Agugua-Hamilton, who grew up in Northern Virginia and, like Brunelle,  had friends and family at the game.

“It’s great to come home and do this in my home state at a school that I’ve always wanted to be at,” Coach Mox said.

At UVA, Agugua-Hamilton joined an athletic department stocked with teams that compete for ACC and NCAA championships. It’s been a while since women’s basketball was part of the group, but Ryan led the Cavaliers to three Final Fours during her illustrious tenure, and Agugua-Hamilton has ambitious goals.

“I’m just happy that fans are excited about women’s basketball again,” she said. “It’s a storied program, and there’s so much potential here to get back to those glory days. And I’m just excited that we’re going to do that.”

Bennett is rooting for her. He’d love for JPJ to be home to another elite program.

Cavaliers Old and New Step Up in ACC Opener