That wasn’t the case with Virginia’s opponent Friday night at John Paul Jones Arena. The University of Maryland Eastern Shore’s tallest starter is 6-foot-5 Nathaniel Pollard Jr., and the fifth-ranked Cavaliers, not surprisingly, dominated inside in a 72-45 victory.

Senior forward Jayden Gardner, who led Virginia in scoring in 2021-22, hasn’t been as productive this season, in part because the team has more options offensively, including 6-foot-8 Ben Vander Plas, a graduate transfer from Ohio. Against UMES, however, Gardner was virtually unstoppable. In his 25 minutes, he made 12 of 15 shots from the floor, plus 2 of 5 free throws, for a 26-point outburst.

At 6-foot-6, Gardner isn’t tall for a post player, but he’s a powerfully built 233-pounder with crafty moves around the basket.

Gardner averaged 15.3 points per game in 2021-22, his first season at UVA. He came into the UMES game averaging 7.8 points and shooting only 35 percent from the floor, but he looked comfortable and confident from the start Friday night. He scored 18 points as UVA built a 40-22 halftime lead.

“I thought he played well offensively for sure,” Bennett said, “and the guys did a really good job of finding him and he did a good job sealing and finishing and slowed down … And so that was good to see, because I think he’s been a little bit rushed at times, but we’re going to need that that offensive punch that he gives us, because when he’s aggressive, but not rushing, that’s when he’s at his best and I think that really helps us.”

“Going into the game, we knew that they were much smaller than us,” Shedrick said. “So I think it just came naturally. We should be able to get buckets inside, [and] our guards came out and helped us get the ball inside.”

Gardner said: “The guys were feeding us tonight. So I think it just goes back to what I said about [this being an] unselfish team, because you don’t know whose night it could be.”

As they did last weekend in Las Vegas, where they won the Continental Tire Main Event, the Cavaliers wore warmup shirts bearing the names and jersey numbers of Devin Chandler (15), Lavel Davis Jr. (1) and D’Sean Perry (41). A moment of silence was held before the game to honor the memories of the three UVA football players, who were shot and killed Nov. 13 after returning from a class field trip to Washington, D.C. 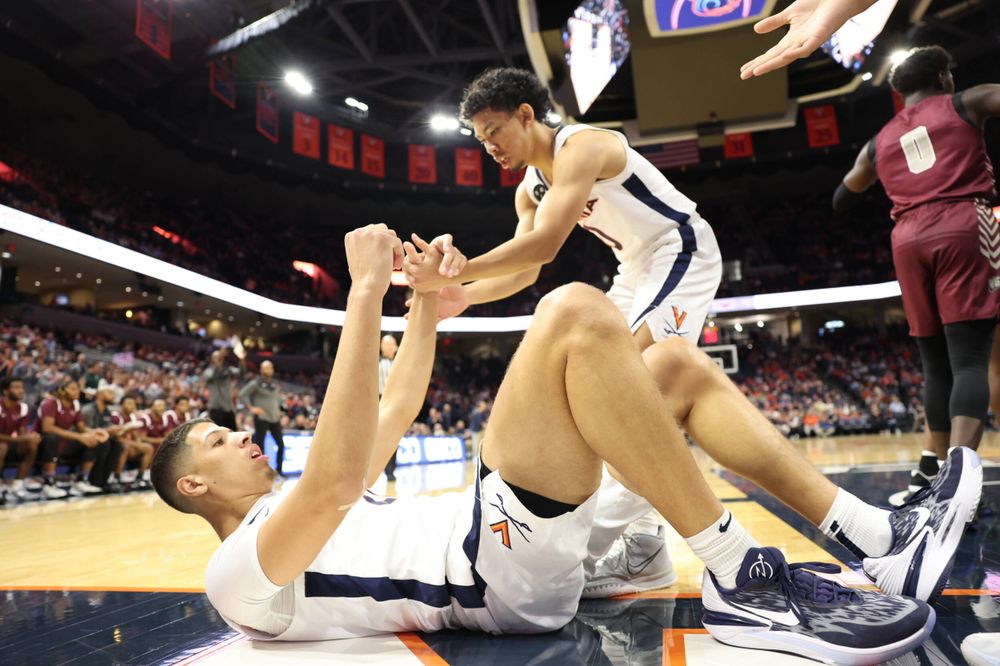 UP NEXT: The Cavaliers travel to Ann Arbor, Mich., for their ACC/Big Ten Challenge matchup. At 9:30 p.m. Tuesday, in a game to air on ESPN, Virginia (5-0) takes on Michigan (5-1) at the Crisler Center.

It’s an arena with which Bennett, a former assistant at Wisconsin, is familiar. “Every game will present different challenges,” he said. “Now you’ll go in a hostile environment against a high-quality team with size and ability, and you’ll have to do the same and outlast ‘em.”

In Dickinson, who’s listed at 260 pounds, the Wolverines have an old-school center who’s at his best on the low block. A product of the storied program at DeMatha Catholic High in Hyattsville, Md., Dickinson, is averaging 18.5 points and 9.5 rebounds, and he’s shooting 60 percent from the floor.

Shedrick said Friday night that he had yet to begin studying the Wolverines, but “I know they have Hunter Dickinson. He’s an elite talent. I’m looking forward to the challenge.”

Michigan’s head coach, Juwan Howard, starred as part of the Fab Five at the Big Ten school. He has two sons on the team: Jace Howard, a junior guard, and Jett Howard, a freshman guard who’s averaging 15.2 points per game.

SOUND BITES: The win raised Bennett’s record at UVA, where he’s in his 14th season, to 321-117. The program’s all-time winningest coach, Terry Holland, went 326-173 in 16 seasons. Among the postgame comments Friday night:

* Shedrick, who’s second on the team (behind Beekman) in steals this season: “In my head I see it as a competition with Reece. I let him know. I’m like, ‘I’m right behind you, bro. I’m gonna get you.’ … I’ve just been trying to play with active hands and my long arms and it’s worked so far.”

* Shedrick on the Cavaliers’ improved depth this season: “It could be anybody any night, and obviously today was it Jayden’s night.”

* Gardner: “We’ve got a lot of capable scorers and we’re just gonna keep playing together. And we’re playing very unselfish basketball right now. I think we had 18 assists tonight.”

* Crafton on the Cavaliers: “Their overall length and size at every position is good, outside of the point guard spot. You feel like you’ve got an opening for two seconds, and then it’s gone. I thought they had a great game plan, and I thought we struggled to score against their length, their size and just their overall girth.”