Hoos Make Themselves at Home in Tallahassee

TALLAHASSEE, Fla. — As the final seconds ticked off the scoreboard clock Saturday evening, Florida State head coach Leonard Hamilton had no desire to prolong a painful game for his basketball team.

“No foul, no foul,” Hamilton instructed his players as Virginia guard Kihei Clark dribbled near midcourt.

For UVA, victories in this college town have been hard to come by during the tenure of Hamilton, whose 400 wins with the Seminoles are the most in that program’s history. Before Saturday, the Cavaliers had won as many games at Duke’s Cameron Indoor Stadium under head coach Tony Bennett as they had at the Seminoles’ Donald L. Tucker Center. But this ACC game turned out to be unusually one-sided, partly because of the Wahoos’ torrid 3-point shooting in their 67-58 win.

Virginia made its first three shots from beyond the arc and finished 11 of 22. Armaan Franklin was 4 for 7, Ben Vander Plas was 3 for 6, and Reece Beekman was 2 for 3. Freshmen Isaac McKneely and Ryan Dunn hit one 3-pointer piece.

Vander Plas and Franklin each started 2 for 2 from 3-point range. Vander Plas’ first trey, at the 16:51 mark of the first half, put the Hoos (13-3, 5-2) ahead to stay, and they rarely faltered thereafter.

Franklin, a 6-foot-4 senior who’s in his second year at UVA, finished with a game-high 20 points. Vander Plas, a 6-foot-8 sixth-year senior who transferred from Ohio University to Virginia after last season, added 15 points. He and Franklin grabbed seven rebounds apiece.

“I think Armaan and I kind of feed off of each other,” Vander Plas. “We’ve got a really good relationship, a couple celebrations we have together. Just watching each other play like that, it’s really fun.”

Franklin’s backcourt mates, Beekman and Clark, shined too. Beekman finished with eight points, four assists and three rebounds, and Clark had a game-high six assists to go with his nine points and five boards.

Beekman and Clark have been mainstays for Virginia for three seasons. Less expected were the contributions of the 6-foot-8 Dunn, who played about 90 seconds Tuesday night in UVA’s win over North Carolina. Against FSU, Dunn totaled nine points, four rebounds and a team-high three blocked shots in about 17 minutes off the bench.

On the UVA bench, Bennett couldn’t have been much happier.  “I yelled so hard I almost passed out,” he said, smiling. “Sometimes you do that, the older you get, when you exert yourself more … To see him go in there and stay continuous [was great], and his athleticism is real, and I thought he did a good job with a block here and there, and just his length. So I was real happy with him.”

Dunn, who played the final 11:04 of the game, closed the first half by blocking a shot by FSU standout Matthew Cleveland.

“I feel like I’m always talking about the young guys, but they’re unbelievable,” said Vander Plas, who’s 24 years old. “Ryan comes in and he does a lot of the dirty work, plays really, really hard defensively, and he had a couple dunks today … and hit a 3. He really does it all, so it’s really, really good to see those young guys [shine].”

The win was the Cavaliers’ first at FSU since February 2018 and only their third in Tallahassee in 14 seasons under Bennett. None of Virginia’s current players had won at the Tucker Center.

“I think we got off to a real good start,” Bennett said “Of course, making some 3s [helps], but [Virginia was] running good stuff and taking care of the ball against [the Seminoles’] switching and their pressure. And we made it fairly difficult for them to get good shots. They made some tough shots, but we didn’t have too many easy ones for them. They had to earn, and that’s what you’re always working towards in practice and in games.”

Bennett shuffled his starting lineup Saturday, starting Vander Plas in place of 6-foot-11 Kadin Shedrick. The Cavaliers were coming off a victory over North Carolina in which Vander Plas played extensively at center, and that combination proved effective again Saturday, when Shedrick played only 5 minutes and 10 seconds.

“Sometimes we’ve gone big [this season],” Bennett said. “There’s different opportunities, and it’s I think, important to have everyone stay ready and have different looks and just continue to find our chemistry.”

Had the Seminoles started 7-foot-4 Naheem McLeod, Bennett said, he would have countered with Shedrick. But McLeod began the game on the bench, and “so we said, ‘Let’s go with Ben,’ ” Bennett told reporters. “And I’m glad, because the way they were switching and pressuring us, his sureness and catching and his decision-making with his passing, and threatening from 3, it just pulls some people out, so then there might be some more driving opportunities.”

Virginia built a 13-point lead in the first half, but the Noles (5-13, 3-4) trimmed their deficit to eight by the break. Early in the second half, FSU cut UVA’s lead to six, but Beekman answered with a 3-pointer to make it 38-29. Then, after another Florida State basket, Clark showed off his craftiness, finishing with his left hand on a drive from the right side and then adding a free throw to make it a 10-point game.

“I think a big thing, and it’s really probably across all of college basketball, is to just bend, don’t break, that mentality,” Vander Plas. “Especially on the road, when the crowd starts to get into it after a couple buckets. Whether it’s a timeout or a dead ball, you kind of come together and refocus and get back to the game plan.”

Bennett agreed. “I think that’s a huge key for teams that want to be good: the ability to respond,” he said, “because there’s going to be ebbs and flows or runs in a game, and can you go back down on the other end and make a key shot or get a key stop? At times [in other games] when teams have made a run, we’ve either turned it over a couple times or shot a quick shot or something’s happened, or missed a defensive turnover. But today {UVA players] were more on point in terms of what they needed to do … not bending too bad or breaking, making them earn, and then usually someone making a nice, key play.”

Florida State, in front of a tepid home crowd, never seriously threatened after Clark’s three-point play. Injuries have hammered the Seminoles this season, and this is not one of Hamilton’s better teams. Still, the Noles were 3-0 in ACC play at home before Saturday. and overall they’d won 52 of their previous 58 games at the Tucker Center.

That didn’t faze the Cavaliers, who’d opened ACC play Dec. 3 with a 62-57 win over FSU at John Paul Jones Arena. Virginia turned the ball over only six times in the rematch, matching its season low, and held the Noles to 39.6-percent accuracy from the floor.

Cleveland finished with 10 points and 10 rebounds to become the first Seminole since the 1971-72 season to post seven consecutive double-doubles, but the Cavaliers made him work for everything Saturday.

“I liked the defensive side of things,” Bennett said. “It was a smarter defensive game today than we’ve had perhaps. We’re trending in the right direction that way, but we gotta keep working at it.” 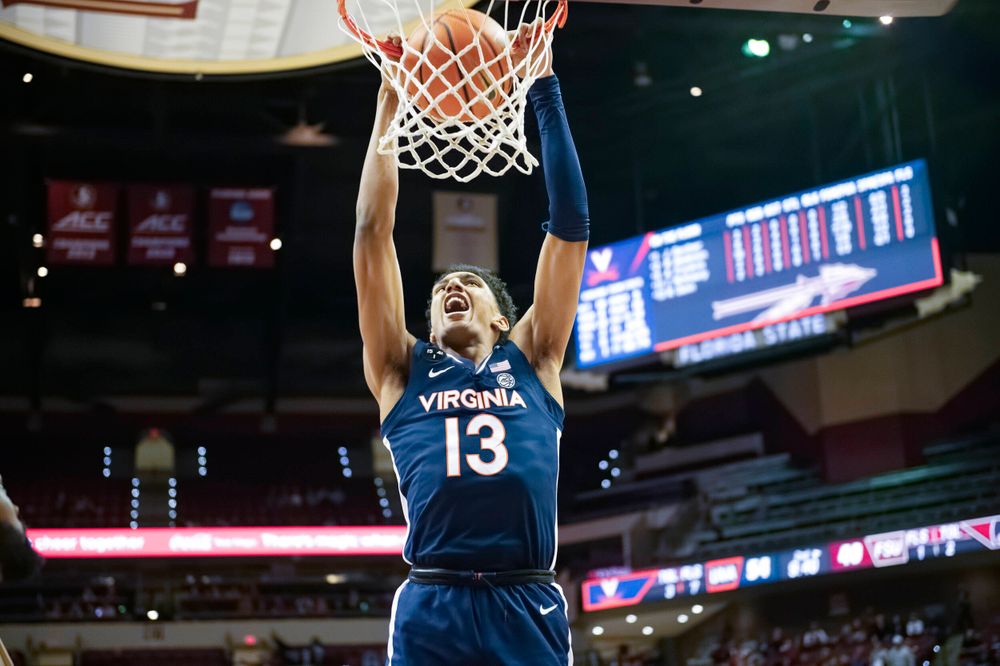 ON A ROLL: Since going scoreless against the Miami Hurricanes on Dec. 20, Franklin has reached double figures in each of UVA’s past six games.

“Just staying aggressive, trusting the work I put in in the offseason and just staying confident in myself, not getting discouraged with myself when I see a couple of shots not go in,” Franklin said.

Bennett said: “He’s freed up. Some of the things we’re running offensively, I think it fits him better, and he’s got a freedom about it. When the shot’s there, he’s being aggressive and hunting the catches, the shots, and just doing well, and then he’s rebounding for us too. That’s what I like. He’s come back since the Miami game, and I think he’s really taken a step and helped us out. I like the opportunities he’s getting in terms of being assertive offensively, and it’s kind of coming together for him.”

COMMONWEALTH CLASH: The first of UVA’s two regular-season games with Virginia Tech is Wednesday night at John Paul Jones Arena. The 7 o’clock game will air on ESPNU. The rematch is Feb. 4 in Blacksburg.

UVA leads the series 96-58 and has won five of the teams’ past seven meetings. The longtime rivals split their two games in 2021-22, with each winning at home.

This will be Vander Plas’ first taste of a rivalry in which he’s not well-versed. “I just know people really, really look forward to that,” he said, “so it should be a fun atmosphere. I’m really excited for that game. 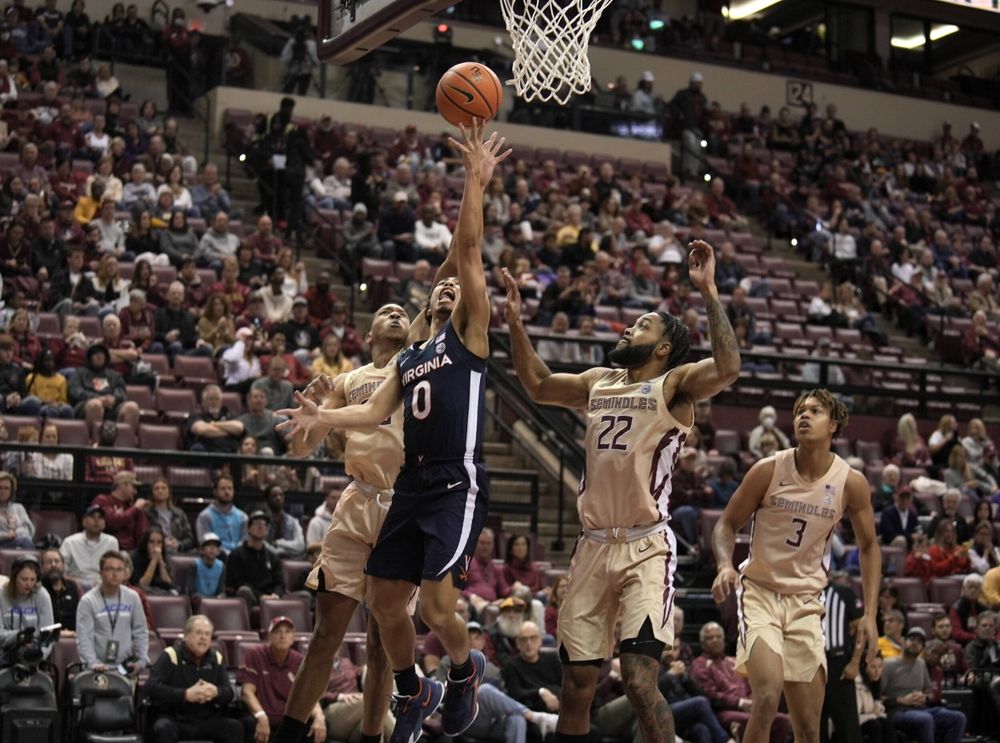 SOUND BITES: In a series that’s tied 28-28, the win was only Virginia’s ninth in Tallahassee. Among the postgame comments:

* Vander Plas on Clark’s pivotal three-point play: “Man, just the experience that he has, knowing what to do in that situation, that was big.”

* Bennett on the injuries that have derailed FSU’s season: “It’s challenging, because it’s a fine line between being really solid and being on the other side of it. And when you lose a key piece or two or three, it’s a challenge … They’re still playing hard and doing some good things, but it’s affecting them.”

* Bennett on the first-half sequence that ended with Dunn’s third-chance layup: “I joked and said, ‘Are you padding your offensive-rebounding stats?’ ”

* Franklin on the Cavaliers’ 3-point shooting: “We just stepped up and knocked ‘em down today. Just having that lineup out there where we can space the floor, you’re going to have your opportunities. You’ve got guys like Kihei and Reece who can really garner attention when they drive in the middle, so [it’s about] just getting ready and getting your feet set.”

* Dunn on whether he expected to play significant minutes Saturday: “A little bit. They always say to stay ready, and I think with [the Noles’] length and their size, I would have been called, so I kept myself mentally ready, just to do my job and do my best at it.’”

* Dunn on adjusting to college hoops: “Sometimes I’m a little bit afraid, to be honest, but I think once the game gets going, I’m starting to get better at just letting the fear go and just playing. And TB and the coaching staff do a really good job of that with me, just letting me play through my mistakes and just being able to go out and compete.”

* Dunn on his fast-break dunk off a pass from his classmate McKneely: “We have a connection, I would say. It felt good, us two just being on the floor together and playing.”