With the win, the Cavaliers extended their lead in the Commonwealth Clash standings, 5.0–1.0, presented by Smithfield.

HOW IT HAPPENED
After a back and forth first half, which featured four lead changes, UVA led the Hokies 40-31 at the intermission. Both teams shot above 50 percent from the floor as the Cavaliers shot 17 for 31, while Virginia Tech shot 12 for 23. Franklin led all scorers at the half after registering 12 points on 5-of-7 shooting, including a go-ahead and-1 finish to give the Cavaliers a 26-24 lead with 5:02 to play in the opening half. From that point forward, the Hokies never regained the lead for the remainder of the contest. The score was tied 26-26 before UVA closed out the half on a 14-5 run, which was capped by a Beekman slam in traffic as the game clock expired to lift the JPJ crowd to its feet. Offensively, Virginia dominated the interior, outscoring the Hokies 26-6 in the paint in the first 20 minutes of play.

🖼️ Hang it in the Louvre!

The Hokies cut the UVA lead to as little as two [51-49] midway through the second half, but that was as close as Tech would get the rest of the way. The Cavaliers responded by scoring six straight points to swing momentum back in their favor. Gardner and Beekman converted Virginia’s fourth and fifth and-1 finishes of the game, respectively, in the final eight minutes of play. Beekman’s and-1 gave UVA its largest lead of the contest [74-60] with 3:52 to play. Clark scored 12 of his 20 points in the second half, while Gardner added eight points. Vander Plas pulled down five rebounds and Isaac McKneely chipped in seven points in the second half.

THE GAME BALL GOES TO:
Kihei Clark. Clark scored a season-high 20 points on 7 of 14 shooting and knocked down all four of his free throws. In addition to his scoring performance, Clark dished out five assists, including four in the first half. He drained his second and final 3-pointer of the night with 4:29 to play on an assist from Vander Plas, which gave the Cavaliers a double-digit lead [71-60].

The most wins in program history! 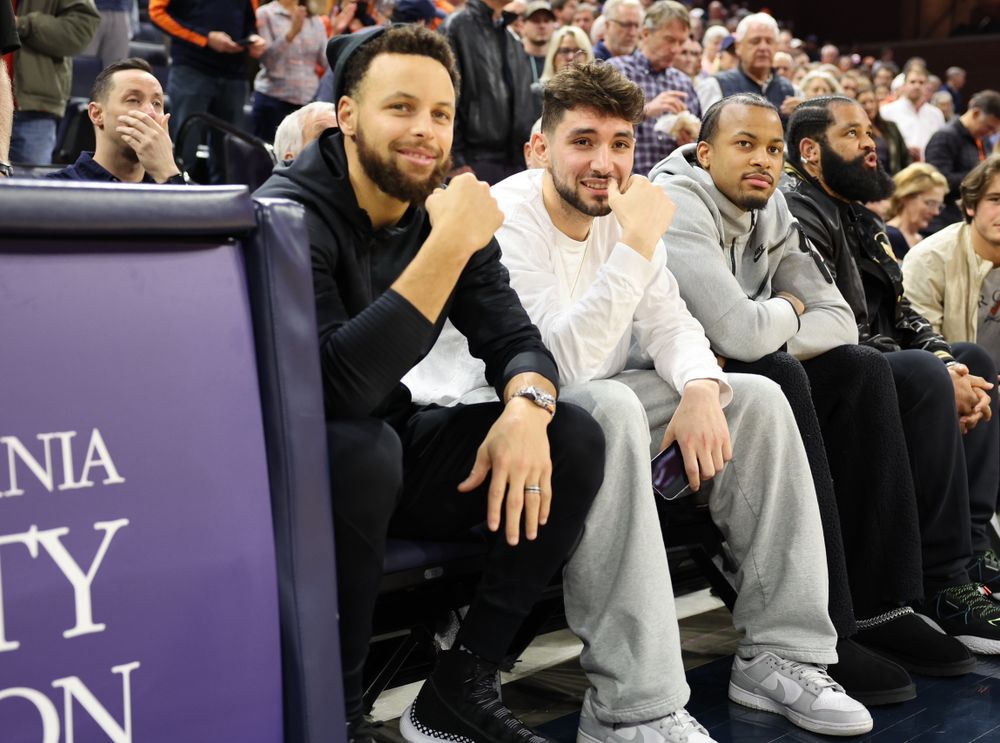 Former Cavalier and current member of the Golden State Warriors Ty Jerome (middle) and teammates Steph Curry (left) and Moses Moody (right) were in attendance for Wednesday's victory at JPJ.