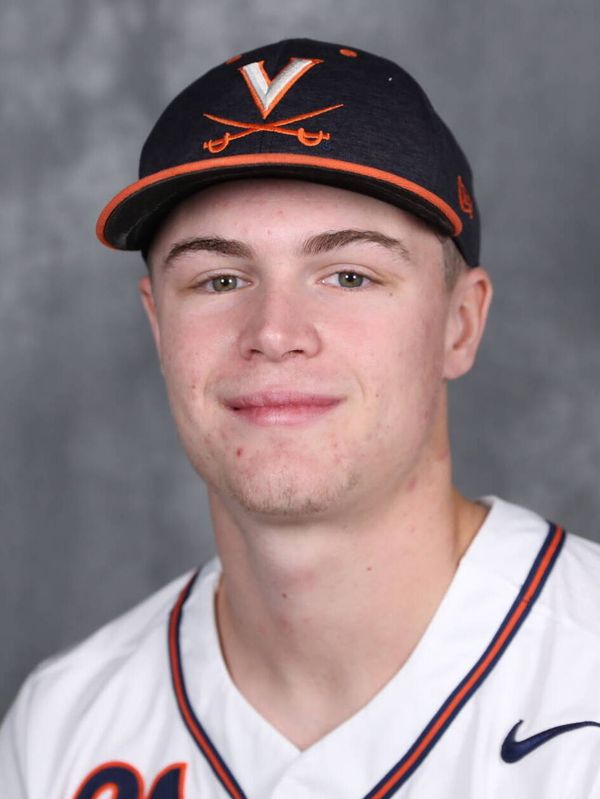 2022
• Appeared in 10 games, all in relief.
• Went 1-0 with a 0.66 ERA in 13.2 innings pitched and recorded 11 strikeouts.
• Did not give up an earned run in his first eight appearances (11 IP)
• Pitched in combined shutouts against VMI (Feb. 23) and at Pitt (April 16)
• Made his collegiate debut in UVA’s home opener against VMI on Feb. 23. Pitched a scoreless inning of relief.
• Was credited with the win against George Mason on April 27 after tossing 2.1 innings of scoreless relief.
• Listed on the ACC Academic Honor Roll

SUMMER 2021 – Played in 27 games for the Niagara Power of the Perfect Game Collegiate Baseball League … went 14-for-81 (.173) with a double, nine walks and six RBI … played alongside future UVA teammate Casey Saucke while with the Power

DEMATHA CATHOLIC HIGH SCHOOL
• Four-year varsity starter in baseball at DeMatha Catholic
• As a sophomore earned First Team Washington Catholic Athletic Conference honors, was a USA Today First Team All-State selection and was a First Team MaxPreps sophomore All-American
• Ranked the No. 3 player in the state of Maryland and No. 106 nationally by Perfect Game
• Was a part of nine All-Tournament teams at various Perfect Game events
• Played travel baseball for the Richmond Braves (four years) and the Kansas City Royals Scout team (one year)
• Graduated DeMatha with Honors and a 3.7 GPA

PERSONAL
• Born in Annapolis, Md.
• Son of John & Lisa Greene
• Has a younger sister, Gabby
• Has yet to declare a major at UVA