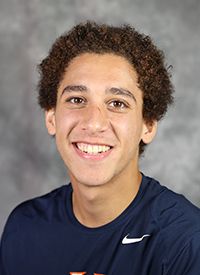 2021-22
• MASC Men’s Player of the Year
• First-team All-MASC
• Second team CSA All-American
• Compiled an overall record of 16-4 to lead the Cavaliers
• Competed at the No. 1 position in every match he participated in
• Notched points against seven top-10 opponents
• Went undefeated in at the MASC Championships in route to Virginia’s third consecutive title
• Competed for the Pool Trophy (CSA A-Draw)
• Named the first CSA Player of the Month for November (12/6)
• Cracked the top-100 in the world by rising to No. 100 in the PSA rankings in September, moving up to a career-best No. 94 ranking in November
• Picked up the highest-ranked win of his career, topping world No. 17 Youssef Ibrahim of Princeton in five games (11/20)
• Won his first three matches each in three games
• Secured the Cavaliers’ win against Cornell by battling back from an 0-2 deficit to win in five games (11/21)

2019-20
• Named a first-team All-American, first Cavalier to earn the first-team honor from the CSA
• Competed in the Pool bracket at the CSA Individual Championships
• Recorded an 18-2 overall record
• Won 11 matches playing at the top of the Cavaliers’ ladder
• Went undefeated in the Potter cup
• Named the team’s MVP for the season
• Advanced to the quarterfinals in the Pool tournament
• Lost just one match during the regular season
• Named to the ACC Academic Honor Roll

Background
• Competed at four U.S. Junior Squash Championships, finishing as the U19 runner-up in 2018, the U17 runner-up in 2016 and the U15 runner-up in 2014
• Named a high school All-American
• Advanced to the semifinals at the U.S. Junior Squash U19 Championships in 2017 and was a quarterfinalist that same year at the World Junior Championships in New Zealand
• Won the New England title in 2017, 2018 and 2019, and was named the MVP for all three seasons
• Recorded three undefeated seasons during his high school career while playing as Tabor Academy’s No. 1.
• Ranks second in the U.S. Squash men’s 20-plus age group and ranks fourth overall according to the organization