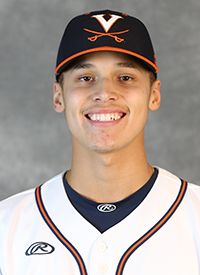 2020
• Appeared in two games, both out of the bullpen
• Totaled two innings on the year where he surrendered four runs and struck out one
• Made his collegiate debut on Feb. 22 in the nightcap of a doubleheader against Bucknell. Did not allow a run over 1.1 innings

CENTREVILLE HIGH SCHOOL
• A four-year letterwinner at Centreville
• A 2018 Rawlings/Perfect Game All-American honorable mention and 2017 Perfect Game Underclass All-American
• Going into the 2019 season was the No. 32 Freshman in the ACC according to Perfect Game
• In Baseball America’s 2018 Top 100 High School Prospect list, was ranked No. 95