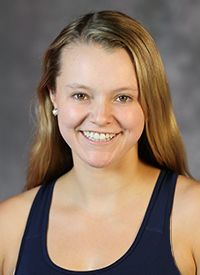 2019-20
• Named UVA squash’s Most Valuable Player
• Recorded an overall record of 14-6
• Finished the year at the No. 6 position in Virginia’s ladder
• Recorded the tying point in the team’s comeback against Dartmouth
• Won all three of her matches in the Kurtz Cup
• Defeated her matchups against George Washington and Dickinson at the Mid-Atlantic Squash Championships
• Named to the ACC Academic Honor Roll

2018-19
• Concluded the year with a 16-11 record
• Played in the top five of the Cavaliers ladder
• Advanced to the consolation finals of the Holleran Cup, falling 3-0 in the finals
• Captured nine wins against top 25 programs

2017-18
• Recorded a 7-14 record, playing in the top three of the Cavaliers’ ladder
• Competed in the Holleran Cup, falling in the consolation quarterfinals

Background
• Was a four-year high school varsity letter winner and team captain her junior and senior year
• High school team was independent school league champions in 2012-13, 2013-14, 2014-15 and 2015-16
• Recipient of Independent School Institution All-League award for 2015-16
•  Massachusetts Most Improved in 2014  and Mass. Squash Sportsmanship Award in 2015

Personal
• Majoring in psychology and minoring in health and wellness
• Daughter of Heather and Charlie
• Has one brother, Henry
• Dad played golf a Harvard
• Mother was a collegiate tennis player at Middlebury
• Brother played squash at UVA