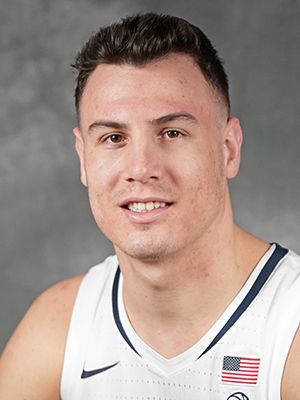 BEFORE VIRGINIA
• Participated in the National Basketball Association’s Global Academy the last two seasons (2016-18) in Canberra, Australia
• Was one of the first graduates of the NBA’s Global Academy to sign with an NCAA school
• Represented Argentina on five separate occasions in FIBA tournaments at the national team level, starting at age 15
• Registered 22 points and six rebounds for Argentina vs. Team USA at the FIBA U18 Americas Championship
• Averaged 16.7 points and 8.8 rebounds in six games as Argentina captured the bronze medal at the FIBA U18 Americas Championship
• Represented Argentina at the FIBA U19 Basketball World Cup, averaging 7.4 points and 9.0 rebounds in seven games

PERSONAL
• Born in San Jorge, Sante Fe, Argentina
• Son of Sandra Marchetti and Claudio Caffaro
• Has two brothers, Agustin and Esteban
• Brother, Agustin, plays professional basketball and was a member of the Argentina national team at the 2019 FIBA World Cup
• Enjoys hanging out with friends and watching television
• Chose Virginia because of the staff, Charlottesville, the University, and the plan of work that was presented to him
• Career objective is to play in the NBA
• Spanish major
• Recipient of the 2021-2022 Barry D. Koval Men’s Basketball Endowed Scholarship