CHARLOTTESVILLE — As the University of Virginia men’s basketball team prepared to fly to Miami on Monday afternoon, Francisco Caffaro strode onto the airplane wearing the blue cape that he’d rarely removed over the previous 24 hours.

Caffaro’s sartorial addition was the flag of his native Argentina, whose men’s soccer team was crowned World Cup champion Sunday afternoon after winning a penalty-kick shootout with France in Qatar.

The outcome delighted Caffaro, a fifth-year senior at UVA, but the match itself was torture for the 7-foot-1 center from Argentina’s Santa Fe province.

“He was so nervous,” teammate Taine Murray said. 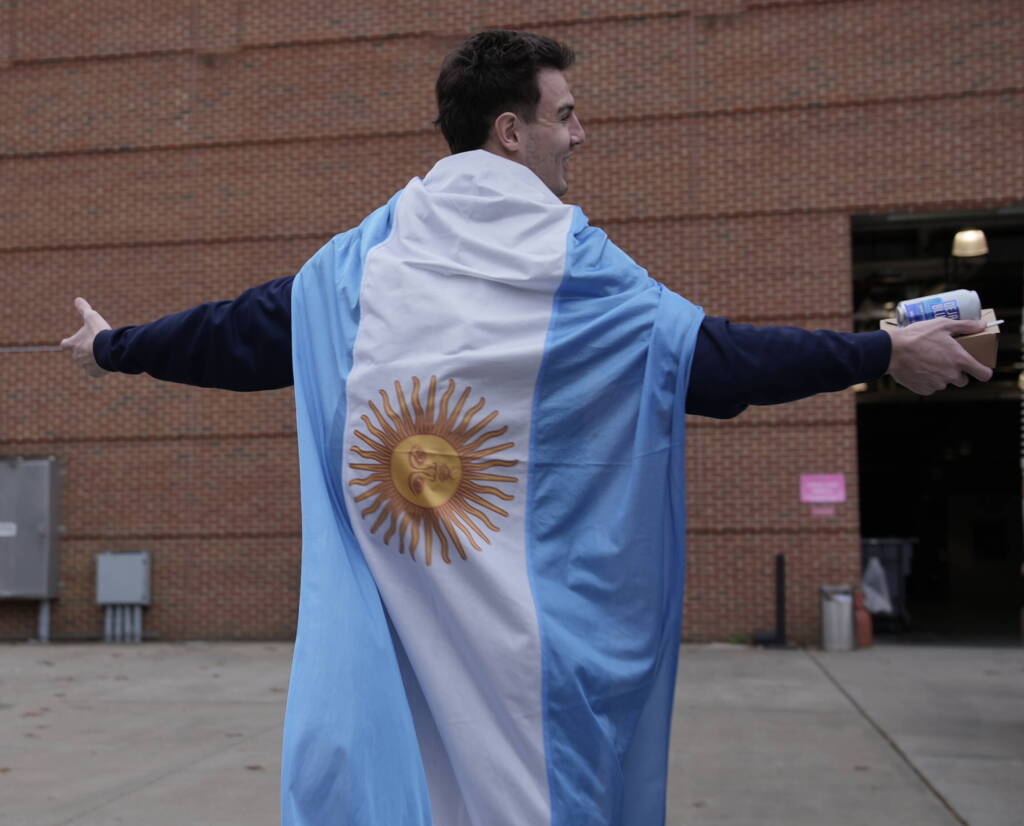 The World Cup final started at 10 a.m. Sunday. The Cavaliers were scheduled to practice at 1 o’clock that afternoon, and most of Caffaro’s teammates gathered at John Paul Jones Arena to watch the match.

Caffaro stayed at his nearby apartment, where UVA basketball alumni Grant Kersey and Shane Nelson joined him, along with Murray and Murray’s father, Carl, who’s visiting from New Zealand.

When Argentina went up 2-0, Caffaro’s stress levels dropped. Then France superstar Kylian Mbappe scored on a penalty kick in the 80th minute. Mbappe struck again with a magical goal in the 81stminute, and suddenly the match was tied.

Caffaro, who’s known around the program as Papi, couldn’t bear to keep watching. He walked out of his apartment and didn’t return until the second half ended with the score 2-2. In the first overtime period, Argentina legend Lionel Messi scored his second goal of the match to make it 3-2, and Caffaro relaxed a little.

“I didn’t think it was over,” he said. “I was just happy. I was like, ‘OK, if they score, [at least] we’re not losing. It was kind of like that relief. But then the handball happened, and that was rough.”

In the 118th minute, an Argentine handball in the box gave France a penalty kick, which Mbappe converted to make it 3-3. That’s how the second 15-minute overtime period ended, setting the stage for a tournament-ending shootout.

For this, Caffaro was calm. “Honestly, I don’t really get as stressed watching PKs as watching the actual game,” he said. “I don’t know if it’s because we know our goalie, Emiliano Martinez, is just really good at PKs, but I just kind of enjoy it more.”

Martinez saved France’s second penalty kick, and moments later Argentina went ahead 2-1. France’s third penalty kick went wide of the goal, and Argentina’s Leandro Paredes converted to make it 3-1. The Argentines were on the verge of their first World Cup title since 1986, long before Caffaro was born, and they didn’t squander the opportunity. Gonzalo Montiel clinched the 4-2 shootout win for Argentina, and the celebration began in Charlottesville and, on a much bigger scale, in Argentina.

“It was great,” said Caffaro, who played for Argentina’s national men’s basketball team at the Olympic Games in 2021.

“I talked to my family and some of my friends back home, and I saw a bunch of videos. It’s every single city, every single town in Argentina. It’s not just the big city that’s celebrating. I used to live in a town that has 3,000 people, and everybody in that town was going crazy and celebrating.”

The sixth-ranked Wahoos play a key ACC game Tuesday in Coral Gables, Fla., where they’ll meet No. 22 Miami at 8:30 p.m. Even so, UVA head coach Tony Bennett was happy to work around Caffaro’s schedule Sunday.

When the World Cup final went to overtime, Bennett pushed back the start of practice at JPJ. Caffaro was a few minutes late, but nobody gave him a hard time.

“The best moment was when he ran into the gym with that on,” associate athletics director Ronnie Wideman said Monday, pointing to Caffaro’s cape.

“I came in and I was all geared up with Argentina, and I had my flag with me,” Caffaro said, smiling. “I just ran across with the flag.”

He’s still marveling at the national team’s feat. “It’s the biggest sport in the whole world, it’s the biggest tournament in the whole world, and it’s one time every four years,” Caffaro said. “Four billion people watch the World Cup finals, so that kind of puts it in perspective of how important it is all over the world, and just to have [the trophy] in Argentina is pretty insane.”

It’s impossible to overstate the popularity of soccer in Argentina. “Everybody watches, everybody plays with friends and stuff,” Caffaro said. “So growing up with my friends, we’d get together. A lot of people like to play video games and stuff. Back home, we’d play some soccer. Even our parents and their group of friends, they have little [five-on-five] tournaments they play on the weekends on these smaller fields.”

Argentina opened the World Cup with a stunning loss to Saudia Arabia on Nov. 22, a result about which Caffaro’s UVA teammates ribbed him mercilessly.

“Since day one, everybody—not everybody, but most everybody—was hating, especially after that Saudi loss,” Caffaro said. “Everybody was like, ‘Argentina, you’re not that good. You suck.’ ”

“We’re the best,” Caffaro said, smiling, as graduate assistant Isaiah Wilkins walked past with an Argentina jersey affixed to his backpack.