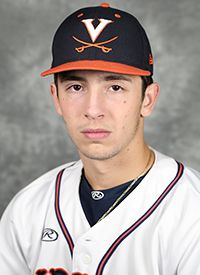 2020
• Appeared in two games, both out of the bullpen
• Made his collegiate debut in the first game of a doubleheader against Bucknell on Feb. 22 in which he pitched a scoreless inning that included his first strikeout

ST. AUGUSTINE PREP
• Drafted in the 36th round (1,092 overall) of the 2019 MLB Draft by the Chicago Cubs
• Three-year letterwinner at St. Augustine Prep
• Went 6-0 with a 1.66 ERA and struck out 65 batters in 38 innings his senior year. Also batted .333 with 26 hits, 24 RBIs, 16 runs and two homers
• Helped St. Augustine to three-straight Non-Public A State Championship games, all against Delbarton.
• Won the Non-Public A State Championship in 2018
• Named to the Philadelphia Inquirer’s and Courier Post’s All-South Jersey First Team as a senior
• Listed on the 2019 Cape Atlantic League First Team