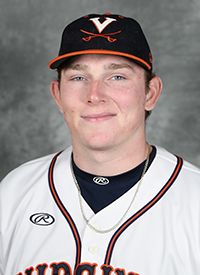 UNIVERSITY OF CHICAGO
• Went 6-0 with a 1.12 ERA and 64 strikeouts in 40 innings
• His 1.12 ERA was the second lowest in a single-season in UC program history
• Ranked second in the nation in strikeouts per nine innings (14.4), fourth in hits allowed per nine innings (4.7) and fifth in ERA
• Struck out a season-high 16 batters in seven innings at Transylvania

CARDINAL GIBBONS HIGH SCHOOL
• Four-year letterwinner
• As a senior, posted a 5-1 record with a 2.13 ERA, 1.16 WHIP and 99 strikeouts in 56 innings pitched
• Earned First Team All-Broward County, FACA All-State Selection honors in his final season
• Led Broward County in strikeouts (99) in 2018
• Named the 2018 District Pitcher of the Year in addition to First Team All District (5A-14) accolades
• National Merit Commended Scholar with a 4.4 GPA

PERSONAL
• Son of Steven and Sarah Petri
• Has two brothers, William and Ben
• His uncle John Offerdahl was a five-time Pro-Bowler for the Miami Dolphins