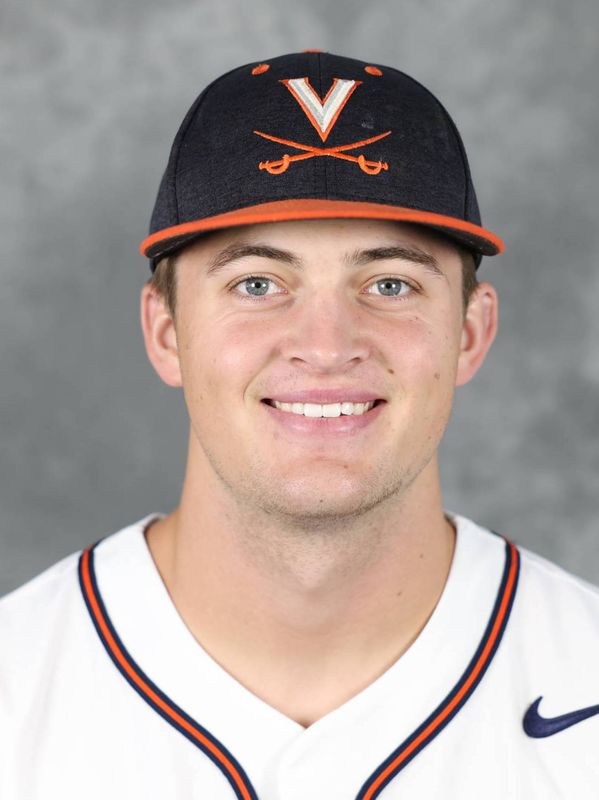 2022 SUMMER: Pitched in seven games (six starts) for the Keene Swamp Bats of the New England Collegiate Baseball League … Went 1-1 with 2.38 ERA and struck out 25 batters in 22.1 innings pitched … only walked nine batters … his last two starts he turned in a pair of seven-strikeout performances, the first in 4.1 innings pitched against Upper Valley on July 13 and the second in five innings against Winnipesaukee on July 19 …

2022
• Appeared in 17 games on the mound as a true freshman, including four starts (UVA won all four of his starts).
• Was 3-1 with a 3.49 ERA over 28.1 innings pitched. Accumulated 36 strikeouts over 28.1 innings pitched while walking only seven.
• Did not allow a run over his first seven collegiate appearances, a total of 13.1 innings pitched.
• Made his first collegiate start on March 15 against Rider and struck out a season-high six batters over 3.2 innings pitched. Also credited with the win.
• Moved to 2-0 on the season after pitching four shutout innings in a 15-3 win over Towson on March 22.
• Struck out five of the seven batters he faced in a relief appearance against Liberty on April 6.
• Fanned five in in two relief innings against Longwood on May 11.
• Got four at bats, three as a pinch-hitter.

LEBANON HIGH SCHOOL
• A three-year baseball letterwinner (9th, 10th, and 12th grade) at Lebanon (2020 season canceled due to COVID19 pandemic)
• Helped Lebanon capture its first baseball state championship in 2021 with his younger brother, Seth Buchanan
• Went 24-0 with a 0.43 ERA and 291 strikeouts in 161.2 innings pitched over the course of his high school career. Only allowed 10 earned runs in three varsity seasons and sported a .415 career batting average.
• Had seven career no-hitters in high school
• As a senior, did not surrender an earned run. He had a 74 pitch, one hit, complete game in the 2021 State Semi-Finals and turned in a 14-strikeout, complete game for the state championship.
• Two-time Bristol Herald Courier Baseball Player of the Year (2019 & 2021)
• Named the 2019 and 2021 District Player of the Year and Region Pitcher of the Year. Was also named the 2019 Region Player of the Year.
• A two-time All-State, three-time All-District and three-time All-Region selection
• At Lebanon won the 2018 LHS Citizenship Award, was named the 2019 Mr. Pioneer and was a two-time LHS Baseball MVP (2019, 2021)
• Ranked as the No. 69 overall left-handed pitcher nationally according to Perfect Game. In the state of Virginia was ranked the No. 4 left-handed pitcher and the No. 18 overall recruit.
• Played travel baseball for the Kansas City Royals scout team (2019-20) with current UVA teammates Alex Greene and Jake Berry.

PERSONAL
• Born in Bristol, Tenn.
• Son of Aaron and Stephanie Buchanan
• Has three siblings, Cole, Seth and Rileigh
• His younger brother Seth is verbally committed to play baseball at VMI in 2024.
• His uncle Eric played football at Emory and Henry College (Emory, Va.)