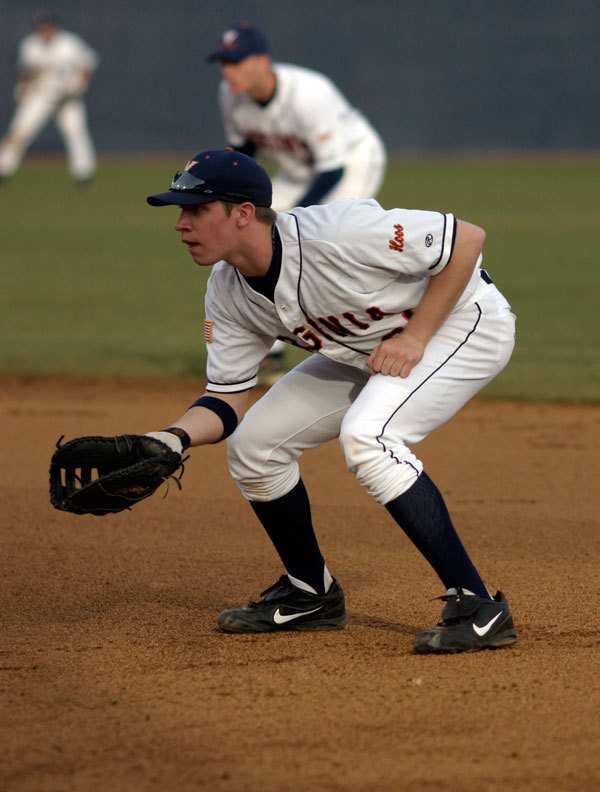 2006
ACC Player of the Year and First Team All-ACC
Finalist for Brooks Wallace Award given to nation[apos]s top player by the College Baseball Foundation
Second Team All-American by Baseball America, Collegiate Baseball, SEBaseball.com, NCBWA
2006 VaSID Pitcher of the Year
VaSID All-State First Team as pitcher and second team as first baseman
College Baseball Foundation All-American team
Named ACC Pitcher of the Week after his 13 strikeout performance in a win over Maryland (5/1)
Tied for team lead with 57 RBI and second in doubles (15), third in home runs (4), fifth in hits (70)
Tied single-season record for base on balls (54)
Became one of only four Cavaliers all-time to win at least 10 games in a single season after going 11-2 with a 2.38 ERA
11 wins on the mound was the second-most in a single season
Fifth-most strikeouts in a single-season (108)
Left-handed hitters hit .167 against while opponents hit .193 against him
Had 18 multiple-hit games and 15 multiple RBI games
Had a season-long 10-game hitting streak (2/26-3/12)
Had seven three-hit games
Homered in games vs. Boston College, Miami, Maryland and Virginia Tech
Tossed a career-high eight innings against Clemson (3/17)
Struck out a career-high 13 batters (4/28)
Recorded a save at Coastal Carolina (2/12)
Had wins on the mound against nationally-ranked Georgia Tech, Wake Forest, Miami, North Carolina and Florida State
Member of the 2006 USA National team which captured its second straight FISU (International University Sports Federation) World Championship and finished its summer season 28-2-1 for a .919 winning percentage, which was the best-ever by a USA Baseball Collegiate Team.
2005

Named Second Team All-ACC as a freshman
Earned Louisville Slugger Freshman All-American and Baseball America Freshman All-American honors
Named to the ACC All-Tournament Team as well as the VaSID All-State First Team
Member of the 2005 USA Baseball National Team
Started 59 of 60 games at first base for the Cavaliers
Hit .313 with 70 hits, 12 doubles, one triple, a team-high 11 homers and 57 RBI
Made 22 appearances on the mound posting a 3-2 mark with a 1.64 ERA while recording the third-most strikeouts (66) on the team in 49.1 innings pitched
First career appearance came on the mound in Virginia[apos]s opener against UNC Wilmington (2/11)
Had 20 multiple-hit games and 15 multiple-RBI games
Had a season-long 16 game hitting streak from Apr. 24-May 26
Made his first start at DH and recorded his first hit, going 1-for-2 in Virginia[apos]s 2-0 win against UNC Wilmington
Finished a perfect 4-for-4 at the plate and recorded his first career home run and RBI in Virginia[apos]s 7-4 win over UNC Wilmington – also pitched two scoreless innings and recorded three strikeouts (2/13)
First collegiate win came when he tossed 6.0 innings with six strikeouts, four hits allowed and one run to help Virginia to a 13-2 win over James Madison (3/9)
Matched a season-high eight strikeouts in four innings en route to his first save of the season and a 9-2 Virginia win over the No. 4 team in the nation (4/23)
Pitched 3.0 scoreless innings of two-hit ball, striking out two in Virginia[apos]s 2-1 win over No. 4 Georgia Tech (4/24)
Doubled and finished 2-for-4 at the plate against #15 Florida State (4/29)
Prep
Drafted in the 39th round by the Atlanta Braves in the MLB Draft
Named the New Jersey Gatorade Player of the Year
Selected as Baseball America[apos]s New Jersey Player of the Year
Named the Star Ledger[apos]s New Jersey Player of the Year
Selected to EA Sports[apos] All-American Team
Named a NBCA/Rawlings All-American in 2003
Selected as the Philadelphia Inquirer[apos]s and the Courier Post[apos]s South Jersey Player of the Year twice (2003, 2004)
Personal
Parents are Rory and Debbie Doolittle
Born Sept. 26, 1986 in Rapid City, South Dakota
Uncle played for JMU[apos]s 1983 team that competed in the College World Series
Has a brother, Ryan, and a sister, Meghan.
Younger brother, Ryan plays for UNC Wilmington