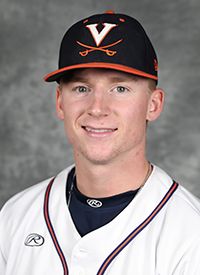 2020
• Saw action in four games and and his lone start came in the first game of a doubleheader against Bucknell on Feb. 22
• At the plate was 1-for-11 (.091) with a run scored
• Collected his first hit as a Cavalier against Dartmouth ono Feb. 28
• Two of his 11 at bats came as a pinch-hitter

MADISON COLLEGE (Madison, Wis.)
• Batted .350 over 91 games in two seasons for Madison
• Earned First Team All-Region IV honors and was the Region IV Gold Glove winner as a sophomore after hitting .342 and swiping 30 bags
• A two-time Academic All-Conference member
• As a freshman, hit .374 and helped the Wolfpack win the Region IV championship to earn the first of two appearances in the NJCAA Division II World Series in his tenure

PERSONAL
• Son of Russell and Kelly Jenkins
• Has a brother Peyton and a sister Landry
• His father Russell, played baseball at Delta State University.