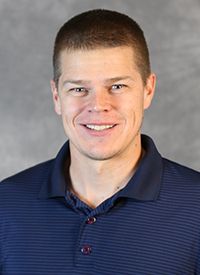 Justin Armistead is in his eighth season as the Assistant Athletics Director for Baseball Administration.