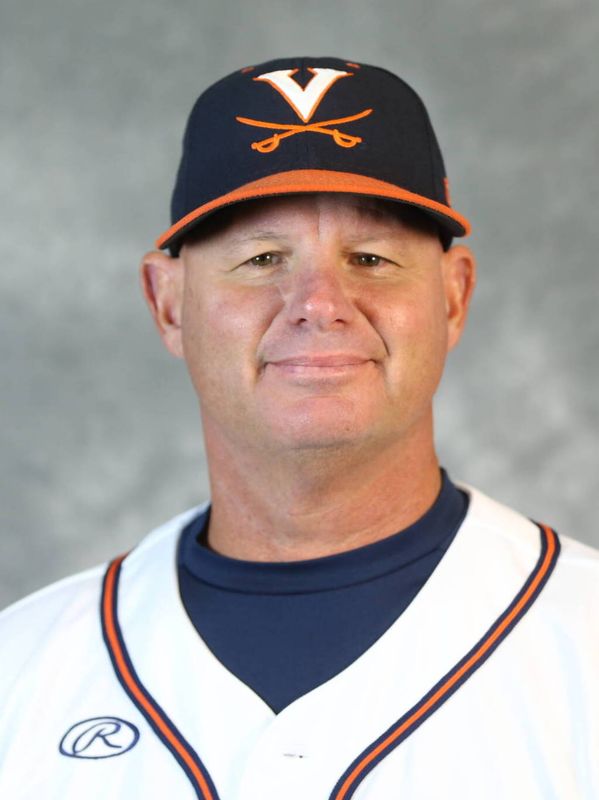 In 2010, Kuhn was the recipient of Collegiate Baseball’s Tom House Teaching Professional of the Year Award. The award recognizes excellence in teaching pitchers and acknowledges years of continued education and study of the latest pitching techniques as identified by scientific fact and biomechanical research.

Virginia advanced to its first College World Series in 2009, setting off a remarkable stretch as UVA has recorded 452 wins in the last 10 years. UVA owns the fourth-most wins in the nation since making its first CWS appearance and reached the pinnacle of college baseball in 2015 as UVA earned its first NCAA national championship.

In this period UVA has made four trips to the College World Series and won six NCAA Regional championships, two ACC tournament titles and two ACC Coastal Division crowns. UVA has racked up four 50-win seasons since 2010 and also has reached the top of the national polls during four of those seasons.

During Kuhn’s tenure in Charlottesville, UVA has produced 93 shutouts, including an ACC-record 16 in 2011. The Cavaliers also have boasted a leaguehigh 29 ACC Pitchers of the Week during the last 15 years. Kuhn’s pitchers are notorious for pounding the strike zone, averaging just 2.9 walks per nine innings since 2004 – fewest in the ACC.

Five of Kuhn’s UVA proteges have gone on to reach the major league level. Michael Schwimer (Philadelphia) and Mike Ballard (Baltimore) each reached the big leagues in 2011. Sean Doolittle made his MLB debut in 2012 with the Oakland Athletics and was named to the MLB All-Star game twice (2014 & 2018). Kyle Crockett ripped through the Cleveland Indians farm system in less than a year, debuting with the Indians in May 2014 and becoming the first player from the 2013 draft class to reach the big leagues. Tyler Wilson made his MLB debut with the Baltimore Orioles in May 2015.

Kuhn has coached 15 All-Americans and 28 All-ACC honorees in his tenure at Virginia. A three-time First-Team All-American, Hultzen was Virginia’s first-ever ACC Freshman of the Year in 2009, then followed it up by becoming the first-ever two-time ACC Pitcher of the Year in 2010 and 2011 before being selected second overall in the 2011 MLB Draft. In addition, Doolittle (2005-06), Jacob Thompson (2007) and Branden Kline (2011) each earned All-America honors and played for the U.S. Collegiate National Team.

In 2018, the Virginia pitching staff struck out 10.5 batters per game, the second most in all of college baseball. The Cavaliers combined for seven shutouts, tied for the ninth most in the NCAA. On Feb. 28, 2018, six UVA pitchers combined for the program’s sixth no-hitter, holding William & Mary hitless over 11 innings before Virginia walked it off in the bottom of the 11th. It marked the first combined no-hitter in program history and matched the longest no-no in the NCAA since 2002. Weekend starting pitchers Derek Casey and Daniel Lynch each eclipsed the 100-strikeout mark, the first Virginia duo to hit the century mark in the same season since 2011. Both were selected in the 2018 MLB First Year Player Draft, with Lynch going to the Royals in the 1st Round while Casey went to the Cubs in the 10th round. Closer Bennett Sousa was the third UVA pitcher to be drafted in 2018, selected by the White Sox in the ninth round.

Kuhn produced his third All-American pitcher in the last four years as closer Tommy Doyle garnered third team honors from the NCBWA in 2017. Doyle, taken in the second round (70th overall of the 2017 MLB Draft. A UVA pitcher has been taken in the first two rounds of each of the last four MLB Drafts.

In 2016, Connor Jones was a unanimous AllAmerican, earning first-team honors from the ABCA, NCBWA and Perfect Game. He also was a first-team All-ACC honoree. Adam Haseley ranked second in the ACC and ninth nationally with a 1.73 ERA while earning All-America honors as a two-way standout.

After sustaining success throughout Kuhn’s tenure, Virginia reached college baseball’s summit in 2015 with the program’s first national championship. As a No. 3 regional seed, UVA made a dramatic run to Omaha, capped by winning two of three games against Florida before ousting Vanderbilt in three games in the CWS Finals, UVA’s second straight trip to the finals. UVA pitchers surrendered just two runs in its two wins in the CWS Finals.

The Cavaliers battled through a tumultuous, injury-riddled regular season, but caught fire in the postseason, winning the Lake Elsinore (Calif.) Regional before coming home to defeat Maryland twice to win the Charlottesville Super Regional.

Virginia had one of the best years in program history in 2014, culminating with the program’s first trip to the College World Series Finals. UVA posted a 53-16 record – its fourth 50-win season in the last five years en route to its third trip to Omaha in the last six seasons. As the tournament’s No. 3 national seed, UVA won four games at the CWS in reaching the CWS championship game. Nathan Kirby earned First-Team All-America honors and was tabbed the Co-ACC Pitcher of the Year.

UVA recorded the second-lowest ERA in program history (2.23), a figure that ranked second nationally. Cavalier pitchers gave up the fewest hits per nine innings of any team in Division I (6.37). An AllAmerica honoree, Nick Howard set an ACC record with 20 saves and then was selected 19th overall in the MLB Draft, one of three Cavalier pitchers to be drafted in 2014.

Virginia posted a 50-win season and earned the No. 6 national seed in the NCAA tournament in 2013. UVA hosted the regional and super regional rounds as the Cavaliers went 50-12, including a 22-8 ACC mark. Kyle Crockett was named a ThirdTeam All-American by the NCBWA and First-Team All-ACC, highlighting a UVA pitching staff that posted a 3.12 ERA. While nearly 45 percent of its innings were pitched by freshmen, UVA still ranked second nationally in strikeout-to-walk ratio (3.38) and sixth in walks per nine innings (2.36) Crockett (fourth round) and Scott Silverstein (25th round) each were picked in the 2013 MLB Draft.

Virginia played host to its sixth regional in nine years in 2012, going 39-19-1 and earning a second-place finish in the ACC Coastal. Branden Kline and Justin Thompson were named to the AllACC team, while Kline (second round) and Shane Halley (20th) were selected in the MLB Draft.

The Cavalier pitching staff had a remarkable 2011 season, leading the nation with a 2.24 ERA – the lowest ERA of any Division I program since 1992 – while also topping the nation in shutouts (16) and strikeouts (664). UVa’s pitching was the key catalyst in the Cavaliers recording a schoolrecord 56 wins, winning the ACC championship and making their second College World Series trip in three years.

Hultzen became the ACC’s first two-time Pitcher of the Year and also was named a First-Team All American for the third straight year while setting the UVA career wins (32) and strikeouts (395) records. He was joined on the All-America teams by closer Branden Kline, who tied the conference saves record with 18, as well as Will Roberts, who fired the first perfect game in UVA history on March 29 against George Washington.

For the first time in program history, three UVA pitchers won 10 or more games in a season – Hultzen (12), Roberts (11) and Tyler Wilson (10). Hultzen became UVA’s highest draft pick ever, as the Seattle Mariners selected him second overall, while Roberts, Wilson and Winiarski also were drafted.

In 2010 the Cavaliers racked up 51 wins and won the ACC Coastal Division championship as well as a regional championship. Virginia also earned the program’s first-ever No. 1 ranking and held the top spot in the polls for 12 weeks during the season. UVA’s pitching staff posted a 3.89 team ERA, which ranked 18th nationally. Kevin Arico led the nation in saves with 18, tying the ACC single-season record in the process. Arico and Hultzen each were named First-Team AllAmericans. After the season four Cavaliers (Arico, Neal Davis, Robert Morey, Wilson) were selected in the MLB Draft.

Behind one of the top pitching staffs in the nation in 2009, Virginia won 49 games and earned the program’s first-ever trip to the College World Series. UVA’s pitchers were sensational in the road to Omaha, posting a 1.45 ERA in the regional and super regional. In the NCAA Irvine Regional, Virginia pitchers allowed just two earned runs – the fewest earned runs allowed in NCAA regional play since the tournament expanded to its current 64-team format in 1999.

In 2007 the Cavaliers posted an ACC-best 2.81 team ERA with nine shutouts. Kuhn was instrumental in Thompson recording one of best seasons ever for a Virginia pitcher. Thompson went 11-0 with a 1.50 ERA, was a consensus first-team All-American and All-ACC and was named a finalist for the Roger Clemens Award. He also earned a spot on the U.S. National Team. With 11 saves, Casey Lambert became the ACC’s all-time leader in saves (43) and finished sixth in NCAA history in saves.

In 2006, Kuhn guided his staff to an ACC-best 3.04 team ERA. Sean Doolittle (11-2) and Thompson (10-4) earned All-ACC honors, becoming the first Cavalier tandem to win at least 10 games in a single season. Doolittle was named a consensus second-team All-American and ACC Player of the Year. He was a finalist for the Brooks Wallace Award, given to the nation’s top player. Thompson was named a freshman All-American. Senior Mike Ballard had his best season, going 9-3 and becoming just the second pitcher in UVA history to throw a no-hitter (vs. Boston College). Ballard was a 14th round draft pick of the Texas Rangers, while Lambert posted his third straight 10-save campaign.

In 2005, Kuhn guided the Virginia staff to a league-best 2.74 team ERA and 11 shutouts. Opponents hit just .232 against UVA pitchers. Jeff Kamrath was named to the All-ACC First Team. Lambert earned a UVA single-season record 14 saves. Two starters were drafted in the 2005 MLB Draft as Matt Avery was a ninth-round pick of the Chicago Cubs while Kamrath was selected in the 11th round by Tampa Bay.

Kuhn’s 2004 pitching staff led the ACC in ERA in league play and finished 15th nationally (3.63) while also pacing the ACC in fewest walks allowed. Kuhn was integral in the development of Andrew Dobies, a third-round draft pick of the Boston Red Sox and Joe Koshansky, a sixth-round pick of the Colorado Rockies. Koshansky was named the school’s first-ever ACC Player of the Year. As a freshman, Lambert tied the then-school record for most saves in a single season (8) and finished second in the ACC in ERA (2.54).

The first assistant coach to be hired at Virginia under head coach Brian O’Connor, Kuhn arrived in Charlottesville after serving as the associate head coach and pitching coach at Arkansas-Little Rock for seven years from 1997-2003. At UALR, Kuhn managed all aspects of the Trojans’ pitching staff and was also the recruiting coordinator for the program.

As recruiting coordinator, Kuhn had five-consecutive recruiting classes ranked nationally by Collegiate Baseball during his tenure with the Trojans.

Before coaching at UALR, Kuhn spent three years as the pitching coach at Charleston Southern. Under his leadership, the pitching staff led CSU to its first baseball conference championship and NCAA Regional appearance in school history. Kuhn also worked at Valencia Community College in Orlando, Fla. Prior to that, he was pitching coach for two years at Buchholz High School in Gainesville, Fla.

Kuhn started his college career at Valencia Community College, where he played from 1987-89, then concluded his career playing one season for the University of Florida in 1990. He is a 1992 graduate of Florida.  Kuhn is married to the former Katrina Gosdin and resides in Charlottesville, Va. The couple has two sons, Kason and Kruse.