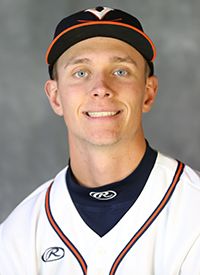 2018
• Listed on the ACC Academic Honor Roll
• Made 13 appearances on the mound, all in relief
• Logged a total of 17.2 innings, allowed seven earned runs and fanned 13 batters
• Recorded the final two outs of the sixth inning in the UVA combined no-hitter against William & Mary on Feb. 28
• Was not charged with an earned run in his first six appearances
• Reached a season-high, three strikeouts in outings against Davidson (3/6) and Liberty (4/18)
• Six of his seven earned runs came in three outings

PERSONAL
• Son of Mark and Laurie Rohm
• Has one brother, Kendall
• Father was high jumper on track team at Wisconsin-Lacrosse