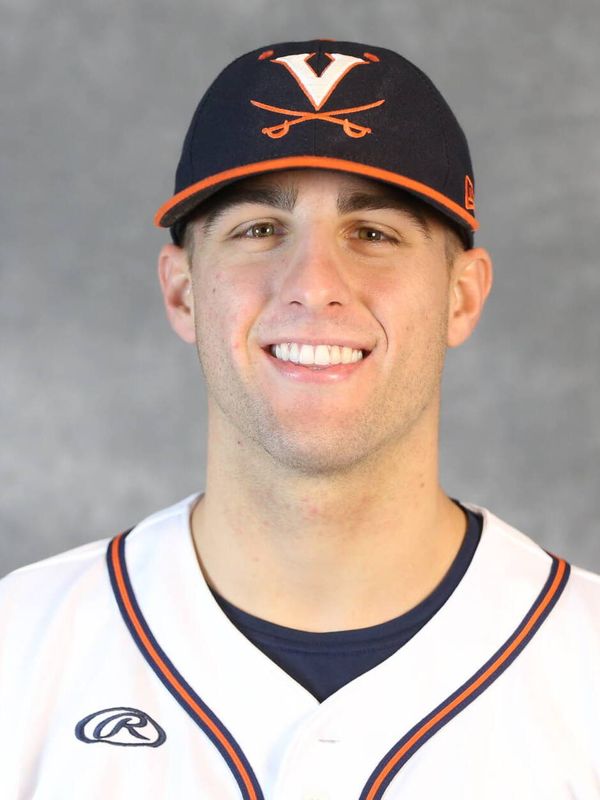 2020
• Started two of the three games he appeared in
• Struck out eight batters in 6.2 innings of work
• Fanned five batters in 3.1 innings in a start against Bucknell on Feb. 22
• Algernon Sydney Award recipient for excellence of character and service to humanity are given each year to two students from the graduating class (undergraduate or graduate) and to one non-student member of the University community

2019
• Appeared in 21 games, 18 as a reliever and three as starter
• Led the team with five wins and had the lowest ERA (3.49) among qualified Cavalier pitchers
• Named to to the ACC All-Academic Team and listed on the ACC Honor Roll
• Received the Virginia athletic department’s Wahoowa Award, annually given to the student-athlete that best displayed selflessness, commitment, school pride, and leadership, all while contributing to the betterment of the team
• Also earned the Virginia athletic department’s Ernest H. Ern Jr. award for outstanding contributions to student life at Virginia
• Among 52 ACC student-athletes to receive Weaver-James-Corrigan Postgraduate Scholarship Award
• Recipient of the Billy Word Memorial Award, the baseball program’s annual award given to the student-athlete who exemplified leadership, cooperative sprit and unselfish service
• Produced a quality start in series clinching wins over Louisville (6.0 IP, 3 ER) on May 11 and Virginia Tech (7.0 IP, 2 ER) on May 17
• In three starts, pitched a total of 18.1 innings, allowed seven earned runs (3.44 ERA) and struck out 18 batters in two Cavalier victories
• Recorded his 100th strikeout in victory over Virginia Tech
• Struck out a career-high, eight batters in four innings of relief work against Longwood on March 26
• Matched his career-best strikeout total working on four days rest in 5.1 innings pitched against North Carolina in the ACC Tournament

2017
· Pitched in 18 games, including a pair of midweek starts
· Named to the ACC All-Academic Team and listed on the ACC Academic Honor Roll
· Opponents batted .160 against him
· Recorded 38 strikeouts in 37 1/3 innings
· Worked more than one inning in 12 of his 18 outings
· Fired 4 2/3 hitless innings of relief in NCAA Regional against Dallas Baptist (6/5), a career-long outing
· Worked perfect eighth inning in ACC tournament win over Clemson (5/26)
· Picked up win over VCU with a 1 2/3 scoreless innings of relief (4/11)
· Started against Old Dominion and worked 3 1/3 innings to notch win (4/4)
· Made first college start against Towson and worked three scoreless innings to earn win (3/22)
· Did not allow a run in first eight appearances (14 1/3 innings)