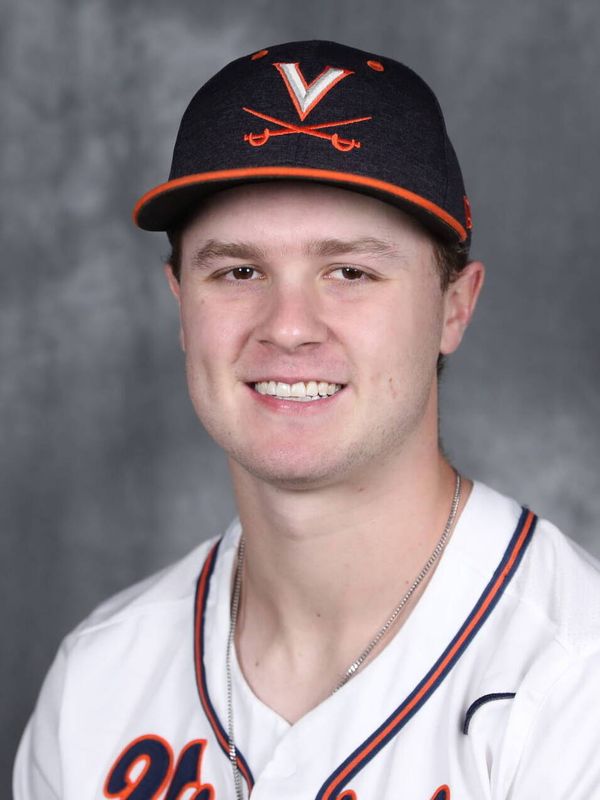 2022
• Selected in the 20th round (614th overall) of the 2022 MLB Draft by the Tampa Bay Rays
• Appeared in 15 games and made midweek starts against VCU (May 4) and Longwood (May 11)
• Only one of his 10 inherited runners on the season came around to score
• Closed the UVA’s opening day, 1-0 win over Bellarmine with an eight-pitch save
• Did not allow a run over his first five appearances of the season, a total of 6.2 innings
• Struck out the side on 11 pitches in his lone inning against Coastal Carolina (June 3) in the NCAA Greenville Regional• Ranked No. 63 on Perfect Game’s top-100 juniors list prior to the season

2021
• Appeared in 21 games with starts against Liberty (March 24) and South Carolina (June 6)
• Went 4-2 with a 3.86 ERA and struck out 59 batters in 39.2 innings pitched while walking 23
• Including the ACC Tournament, struck out 26 batters in five postseason appearances (16.2 innings)
• Pitched in two shutouts – 0.1 innings against Richmond on March 9 and 3.0 innings against Tennessee (June 20)
• Struck out season-best, eight batters in back-to-back outings against South Carolina (June 6) and Dallas Baptist (June 14)
• Tossed five shutout innings, struck out eight batters and was credited with the win in NCAA Regional elimination game against South Carolina on June 6
• Earned the win after 5.2 innings of scoreless relief and eight strikeouts in deciding game of the Super Regional against Dallas Baptist on June 14
• Picked up his first career save by pitching the final three innings of 6-0 College World Series win over Tennessee on June 20
• Also recorded wins against George Washington (March 2) and William & Mary (April 6)
• Struck out six batters twice in a combined 6.1 innings of scoreless relief against Liberty on April 27 (3.1 IP) and against Virginia Tech on May 1 (3.0 IP)

SUMMER 2021 – Selected to play on the U.S. Collegiate National team, one of three Cavaliers from the 2021 to play (Nate Savino, Kyle Teel) … appeared in one game, pitching three innings in which he did not allow an earned run and struck out a pair of batters.

PERSONAL
• Son of Michael and Courtney Wyatt
• Has an older brother, Clark
• A History major
• Recipient of the 2022-2023 Ron and Barrie Tydings Endowed Baseball Scholarship