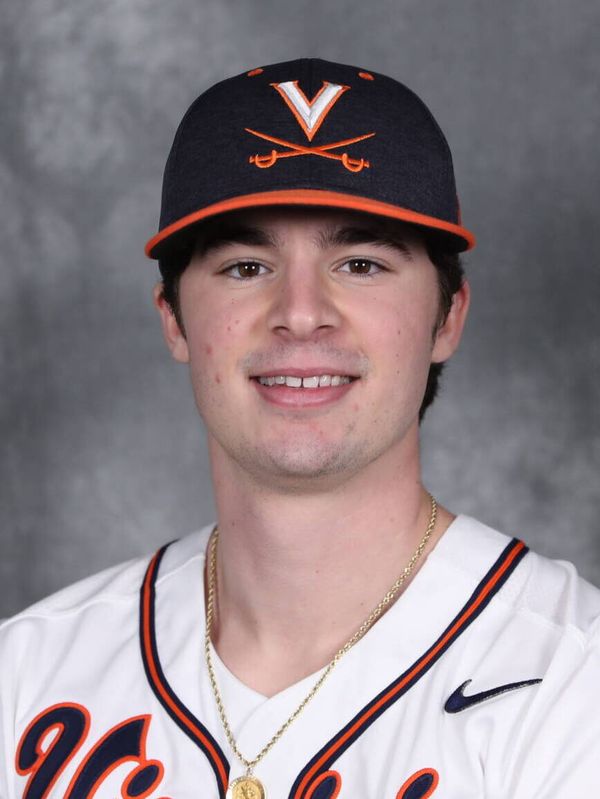 2022
• Started 36 of the 45 games in which he appeared. All 36 starts came at second base.
• Batted .257 (35-for-136) with four doubles a triple and 23 RBI
• His five sacrifice bunts were the fifth-most in the ACC
• Reached base safely in nine-straight games beginning on Feb. 19 against Gardner-Webb, the second game of the season. The stretch included a six-game hit streak.
• Was 6-for-7 in stolen base attempts and swiped two bags against Cornell on Feb. 25
• Drove in a career-high five runs in a 3-for-5 effort against Georgia Tech on April 3. He had three RBI on two hits in a 10-run, fourth inning.
• Had four RBI in his first two at bats against against George Mason on April 27, a two-RBI triple in the second and a two-RBI go-ahead single in the third
• Ranked No. 40 on D1Baseball.com’s Top 50 second basemen prior to the season

2021
• Started all 60 of the games in which he appeared at second base. He started final 47 games of the season.
• Led the ACC and tied for fifth in the country with 11 sacrifice bunts
• Batted .262 with eight doubles, a triple and 30 RBI on the year
• His .281 batting average (38-for-135) in ACC play was the third-highest on the team. Also collected seven doubles (t-2nd most on team), scored 15 runs and drove in 18 runs against league foes.
• Moved up to the two-hole in the lineup on April 20 and stayed there for the final 29 games of the year. UVA went 19-10 in that span.
• Went 4-for-11 with 2 RBI in three games at the College World Series.
• In game three of the Super Regional against ODU, beat out an infield single with two outs in the seventh inning. The single loaded the bases and setup Kyle Teel’s go-ahead grand slam.
• Matched a school-record with three doubles against Boston College on May 22 as part of a career-high, four-hit effort.
• Went 3-for-6 with three runs scored and two RBI in the 18-1 series opening win over Virginia Tech. His go-ahead, two-RBI single in the fifth broke a 1-1 tie and was part of 18 unanswered runs by the Cavaliers in the contest.

2020
• Started all 18 games, 17 at second base and one at shortstop as a true freshman
• Listed as a Freshman All-American by Collegiate Baseball Newspaper
• Batted second in all 18 games
• Batted .338 (25-for-74) with three doubles, four triples, a home run and 15 RBI
• His four triples were tied for the most in the NCAA and were the most in the ACC
• Collected 25 hits, tied for the fifth most in the ACC
• Scored 21 runs tied for the second most on the team and tied for the third most in the ACC
• Tied a school record by scoring five times against UMass Lowell on March 10. He’s one of 11 players in program history to score five runs in a game and first since UVA Baseball Hall of Famer Tyler Cannon scored five at Wake Forest on March 6, 2009.
• Tripled twice in series opener against Dartmouth on Feb. 28, the first Cavalier to triple twice in a game since Adam Haseley in 2016
• Hit his first collegiate home run on March 1 from Dartmouth
• Drove in season-high four runs in series-clinching win over No. 7 NC State on March 8
• Put together four, three-hit games, tied for most on the team
• Completed the 2020 season having reached base in 13-straight games and was on a 10-game hit streak at season’s end
• Reached base in all but two games, hit safely in all but four games

CANTERBURY SCHOOL
• 2018 & 2019 Western New England Prep League’s Player of the Year
• No. 1 shortstop in the state of Connecticut according to Perfect Game
• Hit .508 as a junior and .447 his final season at Canterbury

PERSONAL
• An American Studies major
• Son of Peter and Marie Cotier
• Has one sister, Isabella who plays lacrosse at Brown
• His father Peter played lacrosse and hockey at Union College