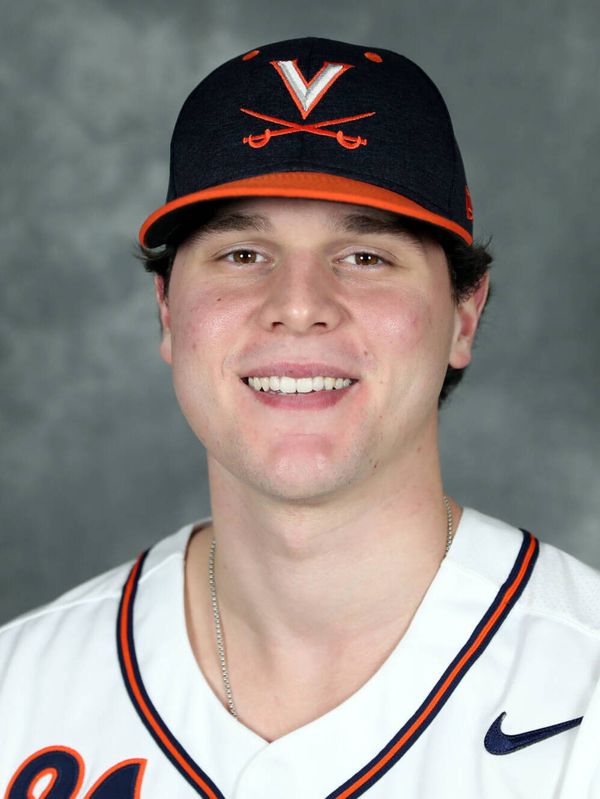 2021
• Drafted in the eighth round (232nd overall) by the New York Mets in the 2021 MLB Draft
• Made 17 appearances on the mound 16 of them starts (tied for 2nd most in ACC)
• Went 7-5 with a 4.52 ERA and 74 strikeouts over 81.2 innings pitched
• Six of his seven wins either clinched a series (UConn, Georgia Tech, Duke and BC) or helped UVA avoid a series sweep
(UNC & FSU)
• Ranked fifth in the ACC strikeouts looking (33), seventh in wins (7) and 10th in innings pitched (81.2)
• His 1.98 walks per nine innings were the fourth fewest in the ACC and his 18 walks were the seventh fewest among ACC qualified pitchers
• Produced eight quality starts, the second-most on the staff
• Won his first three starts of the season by allowing one run over 18.1 innings. Only walked two batters while striking out 20, including nine punchouts against Florida State on March 7
• Against Texas in the College World Series, fanned eight batters and allowed one earned run over seven innings in a no-decision. He retired nine-straight batters from the second to the fifth innings and then sat down eight in a row to finish his outing.
• Listed on the ACC Academic Honor Roll

2020
• Made four weekend starts, three of them were quality starts (most on the staff)
• Went 2-0 with a 2.45 ERA (17th lowest in the ACC) in 22 total innings pitched
• Fanned 23 batters, the fourth-most on the staff
• Struck out a career-best 10 batters in six innings in the first game of a doubleheader against Bucknell. Carried a no-hitter into the fifth and retired 13 of the first 14 batters he faced, including 11 in-a-row
• Took a no-decision after going six innings and allowed only two run while striking out six against then-No. 7 NC State on March 7
• Earned his second win of the season in a 78-pitch, six-inning performance against Dartmouth on Feb. 29. Allowed two runs and struck out three batters

2019
• Made 12 starts on the mound and made one relief appearance as a true freshman
• Was in the weekend rotation for the duration of the season
• Logged 57.2 innings pitched, the third most on the staff
• Combined for a shutout in his first collegiate win on March 4 against Wagner
• Struck out a season-high seven batters in 6.2 innings in a 6-5, series clinching win at Notre Dame on April 6
• Went seven innings, allowed two runs and struck out four in a 10-2 win over then-No. 5 Louisville on May 10

BOSTON COLLEGE HIGH SCHOOL
• The 2017 Massachusetts Player of the Year
• First Team All-State pick by USA Today
• Went 22-4 with a 1.06 ERA in 191 innings pitched while striking out 217 in his prep career
• Rated as the No. 1 overall player in the state of Massachusetts and 7th best pitcher in the country by Perfect Game
• Three-time Boston Globe and Boston Herald All Scholastic Team
• Earned All-Conference accolades in basketball as a senior
• Earned BC High’s 2018 Scholar Athlete Award
• Rated the No. 2 Freshman in the ACC by Perfect Game prior to the 2019 season

PERSONAL
• An American Studies major
• Born in Boston, Mass.
• Son of Gregory and Katherine Vasil
• Has an older sister, Kristina