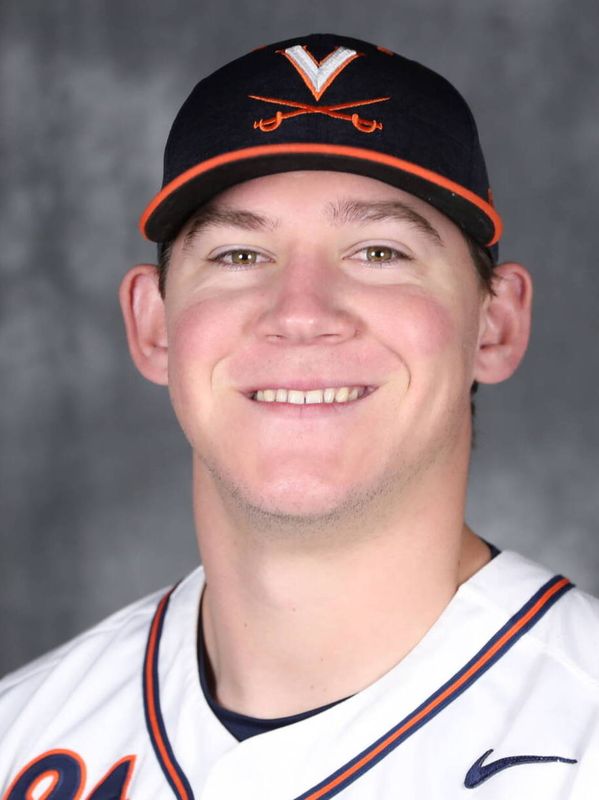 CAREER
• Finished his UVA career with a 9-1 record. His .900 winning percentage is tied for the third-highest in program history (min. 10 decisions).

2022
• Appeared in 15 games out of the bullpen, seven outings were two or more innings.
• Went 4-0 with a 3.29 ERA in 27.1 innings pitched.
• Three of his four wins came against ACC opponents – Georgia Tech (April 2), North Carolina (April 23), VCU (May 4) and Clemson (May 15).
• Did not allow a run in 11 of his 15 appearances on the season.
• On April 20 against Georgetown, pitched a 1-2-3 inning and struck out a batter to record his first career save.
• Struck out four batters in a season-high 3.1 innings pitched in the series finale against Clemson on May 15.
• Only three of his 12 inherited runners came around to score.
• Named to the ACC Academic Honor Roll

2021
• Made 11 appearances, all out of the bullpen
• Totaled 15.2 innings pitched, allowed eight earned runs and struck out 11 batters on the season
• Inherited seven runners on the season, only one scored
• Was second on the staff with three holds (2/19 vs. UConn, 2/21 vs. UConn & 2/28 at UNC)
• Worked four-straight outings where he did not surrender a hit or a run, a span of 3.2 innings
• Earned the win after pitching three scoreless innings against Towson on March 17
• Season cut short due to injury and made his last appearance on April 1 at Georgia Tech

2020
• Appeared in five games, all out of the bullpen
• Struck out eight batters in 8.1 innings of work while allowing only two earned runs
• Struck out the final two batters of the bottom of the fifth against then-No. 7 NC State to leave the bases loaded and preserve a 7-2 UVA lead
• Did not allow an earned run in four of his five outings

PRIOR TO VIRGINIA
• Played one year of football (tight end) at New Mexico Highlands in the fall of 2016
• Transferred to East Los Angeles College prior to the spring of the 2017 to play baseball.
• At ELAC he earned First Team All-State and Pacific Association Southern California All-Region Second Team honors in 2018.
• As a starting pitcher, went 6-4 with a 3.58 ERA and 68 strikeouts in 83 innings pitched at ELAC.

TEMPLE CITY HIGH SCHOOL
• Two-sport athlete, playing football and baseball at Temple City
• Threw a pair of no-hitters in high school, including one to clinch a Temple City playoff berth in the final game of the regular season.
• Went 5-0 with a 2.77 ERA in 30.1 innings pitched his senior year.
• Played quarterback on the football team where he was a two-year letterwinner. Also served as the team captain, earned All-League honors and was named 2015 Offensive Player of the Year.

PERSONAL
• Son of Norman and Anne Kosanovich
• Born in Sleepy Hollow, N.Y.
• Has two younger brothers, Andrew and Daniel
• His grandfather, Bronco Kosanovich played was a center on the Penn State football team and later played for the Pittsburgh Steelers. His cousins Michael and Eli Kosanovich both play football at North Central College.