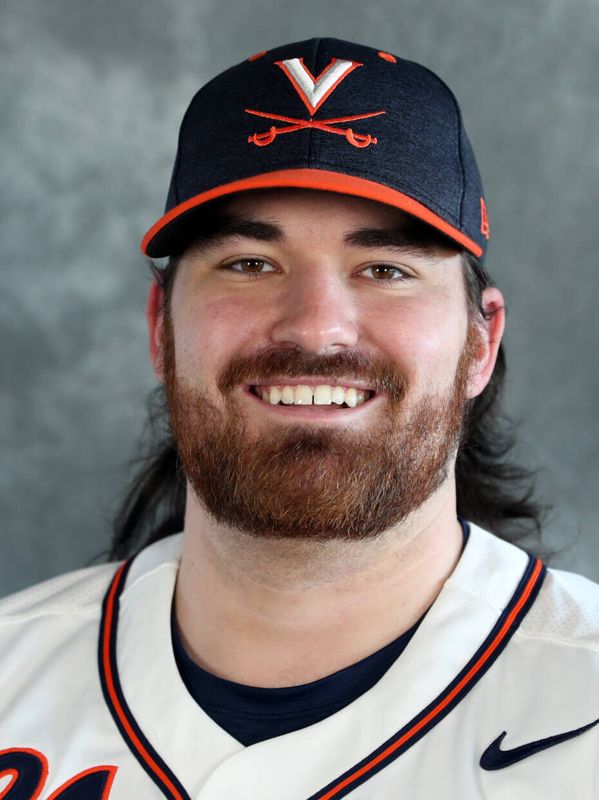 CAREER
• Saved 13 games in two seasons, tied for the ninth-most in UVA history

2021
• Appeared in 22 games, all in relief
• Led the team and ranked third in the ACC with eight saves
• Went 4-2 with 52 strikeouts in 36 innings pitched
• Finished 18 games for UVA, the fourth most in the ACC
• Inherited 17 runners, only four game around to score
• Five of his eight saves came in ACC play where he went 2-0 and held a 0.87 ERA in 11 total appearances
• Earned the win in the NCAA Regional Championship game against ODU on June 8 after pitching a season-high 3.1 innings. He fanned five batters picked off a runner at second in his second appearance of the regional.
• His eighth save came in NCAA Regional championship against South Carolina where he struck out five over 2.1 innings including the final batter of the game with the tying run on first base. After the game he gave “The Interview“.
• Escaped two bases loaded jams, one in the seventh and another in the eighth to preserve a 2-1 Virginia lead at Florida State on March 7. In the ninth, with the tying run on second base, Schoch induced the game-ending groundout to seal his fourth save of the season.
• Member of the initial preseason NCBWA Stopper of the Year Award Watch List
• Second Team Preseason All-American by NCBWA
• Third Team Preseason All-American by D1Baseball

2020
• Ranked No. 40 in D1Baseball.com’s Top 50 relief pitchers in college baseball
• Led the team and was tied for second in the NCAA with 11 appearances, all out of the bullpen
• Struck out 24 batters in 16.2 innings while pitching to a 1.62 ERA
• Ranked second in the ACC and 8th in the NCAA with five saves
• One of six pitchers to throw at least four innings and not allow a run in ACC play
• In series against then-No. 7 NC State, pitched four innings of scoreless relief including a five-out save in the series opener. Came back in the finale to throw 2.1 innings of shutout baseball
• Struck out season-high three batters on five different occasions, three times in just one inning of work
• Used 13 pitches and struck out the side against VMI on Feb. 19 to record his first save in a Cavalier uniform
• Earned his first win in the season finale against UMass Lowell on March 11 after not allowing a run over two innings

PRIOR TO VIRGINIA
• Played the last three seasons at UMBC (2017-19) after transferring from Appalachian State (2016)
• Sat out the 2017 season due to NCAA transfer rules
• Left UMBC as the program’s all-time leader in saves (13) and single-season saves record holder (10 – 2018)
• In two seasons at UMBC, logged 110.1 innings and struck out 135 batters while pitching to a 2.61 ERA
• His 11.01 strikeouts per nine innings over his two seasons is also a program best.
• Earned Second Team All-America East honors in 2019 after going 6-4 with a 3.59 ERA and 64 strikeouts in 52.2 innings pitched
• Was the third player ever at UMBC to pitch in the Cape Cod League (2019) where he was a CCL All-Star and the Most Valuable Pitcher for the Cotuit Kettleers
• In his summer after sitting out, pitched for the Bethesda Big Train of the Cal Ripken League and did not allow a run in 26.1 innings pitched, struck out 33 and did not walk a batter
• As a freshman at Appalachian State, appeared in 17 games (second most on team) and posted a 4.48 ERA with 35 strikeouts in 34.1 innings pitched

OUR LADY OF GOOD COUNSEL
• Four-year letterwinner in baseball
• Named the Washington Athletic Conference Player of the Year his senior season and earned back-to-back First Team All-Conference nods
• Finished the regular season of his senior season with a 0.00 ERA in 53.1 innings with 45 strikeouts and just three walks.