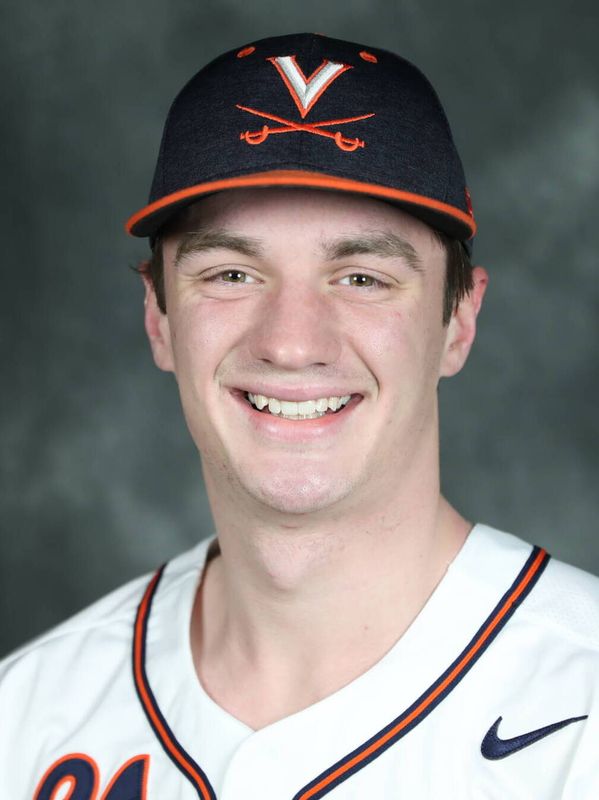 2021
• Drafted in the 13th round (393rd overall) by the New York Yankees in 2021 MLB Draft
• Appeared in a team-high 28 games and made four starts
• His 28 appearances were tied for the fifth-most in the ACC and the 33rd-most in the NCAA
• Went 3-2 with 64 strikeouts over 57 innings pitched
• Inherited a staff-high 24 runners, only seven came across to score
• Recorded wins over Notre Dame (March 12), George Washington (March 30) and Virginia Tech (May 25)
• Pitched in shutouts of Notre Dame (March 12) and Towson March (17)
• Tossed 4.1 innings of scoreless relief at VCU and struck out 10 batters, a then-UVA record for a reliever until teammate Brandon Neeck struck out 16 against Old Dominion in NCAA Regional on June 6
• Went a career-high 5.1 innings in a start against Virginia Tech on May 25 in the ACC Tournament. Earned the win after striking out six and allowing two runs
• Pitched five scoreless innings against VCU on May 4 and struck out five batters. In his two appearances against VCU on the year struck out 15 batters in 9.1 scoreless innings

2020
• Appeared in seven games, the third most on the staff, including two starts (VMI – 2/19 & William & Mary – 2/25)
• Struck out 22 batters in 13.2 innings while posting a 3.29 ERA
• In his five relief appearances, allowed three earned runs in 7.1 IP and accumulated 15 of his 22 strikeouts.
• In the first game of a doubleheader against Oklahoma on Feb. 15, struck out a career-best, six in 2.1 innings of scoreless relief
• Against then-No. 7 NC State struck out four in 1.1 innings of scoreless relief
• His final 2.2 innings of the season, struck out five batters, allowed three hits and did not surrender a run

2019
• Appeared in 16 games as a true freshman and made five starts
• Logged 29 innings where he struck out 21 batters and pitched to a 4.03 ERA
• Virginia was 4-1 when he started on the mound
• In his collegiate debut was credited with the win in UVA’s home opener against VMI (Feb. 19) after he threw three innings of scoreless relief and struck of five batters
• In the month of April made six appearance where he yielded just one run in 11 innings

CASTLE HIGH SCHOOL
• Lettered in baseball (four years) and basketball (three years) at Castle
• Served as a team captain in both sports
• Named the 2018 Courier & Press All-Metro Player of the Year
• A First Team Academic All-State selection in both baseball and basketball
• Three-time Courier & Press First Team All-Metro
• Three-time First Team All-Southern Indiana Athletic Conference selection
• As a senior, was named an Indiana South All-Star and earned First Team All-State honors from Prep Baseball Report
• Posted a 7-1 record with a 1.66 earned run average in 2018
• Castle High School’s 2018 Lonnie Fisher Male Athlete of the Year Award winner
• Rated No. 53 on Perfect Game’s Top-100 freshman in the ACC prior to the 2019 season
• Graduated with a 3.97 GPA and was a four-time Scholastic “C” Academic Letter recipient

PERSONAL
• An Media Studies major
• Son of Dennis and Lisa Messinger
• Born in Chandler, Indiana
• Has three brothers, Eli, Tyler and Lucas
• His father, Dennis, played basketball at Olney Central College and his mother, Lisa, played volleyball at the University of Evansville