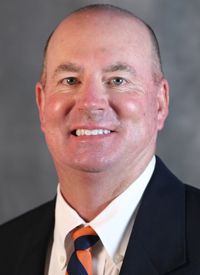 Now in his 19th season directing the Virginia men’s golf program, head coach Bowen Sargent’s run with the Cavaliers has been the most successful period in the program’s history. ACC Champions, NCAA appearances, record-setting performances and academic excellence are all hallmarks of his program. He has watched numerous players go on to play in the professional ranks including the PGA Tour.

In 2021-22, the Cavaliers made their 14th consecutive appearance in the post-season, capping a campaign that saw UVA open the season with a win at the Hamptons Intercollegiate. During the spring campaign, the Cavaliers won their own Lewis Chitengwa Memorial tournament, the first held at Birdwood Golf Course since its renovation.

Sargent also added another first for the program when UVA inked the nation’s top recruiting class that featured the top-ranked junior in Ben James and Bryan Lee, who was ranked No. 5 at the time he signed with the Cavaliers.

In 2021, playing just a spring schedule, the Cavaliers qualified for the postseason for the 13th consecutive season, competing at the NCAA Regional in Kingston Springs, Tenn. That came on the heels of having the 2020 season end prematurely due to the COVID-19 pandemic.

The 2021 squad was named a Golf Coaches Association of America All-Academic Team. The Cavaliers were among only 41 Division I programs to earn President’s Special Recognition status for having a team grade point average of 3.5 or better. A total of four UVA players were named to the 2021 All-ACC Academic team and the Srixon/Cleveland Golf All-America Scholars and 10 earned ACC Honor Roll accolades.

In 2020, a total of five of his players were named to the ACC Academic Honor Roll after eight received the honor in 2019.

In 2019, the team participated in the NCAA Stanford Regional. That came on the heels of UVA finishing second at the ACC Championships, matching the best showing at the league championship in the history of the program.

That same year senior Thomas Walsh picked up national academic honors for the second consecutive season in addition to earning all-ACC accolades for a second straight season. As a junior, Walsh became the second UVA golfer in as many years to win the ACC Individual Championship and the third under Sargent’s watch. Walsh did more than just hoist the medalist trophy, he shot 16-under 200, the lowest score in the rich history of the tournament.

UVA took top honors at the Palmetto Intercollegiate in 2018, marking the 13th-consecutive season Virginia won a tournament title. The victory was the 21st for Sargent with the Cavaliers.

The 2017 campaign went down as one of the most memorable in Virginia’s history. In addition to finishing a program-best 10th at the NCAAs, the Cavaliers saw three players earn All-America honors and produced the ACC individual champion and the league’s scholar-athlete of the year.

Senior Jimmy Stanger picked up the last two honors en route to becoming the first PING first-team All-American in UVA history. He was joined in the All-America ranks by classmate Derek Bard and sophomore Thomas Walsh.

Stanger was a member of the victorious 2017 Palmer Cup team and joined at the U.S. Amateur Championships by Bard and UVA freshman Ashton Poole.

During the 2017 season, UVA won four of its first five tournaments and reached the No. 1 ranking in the Golfstat standings for the first time in its history. 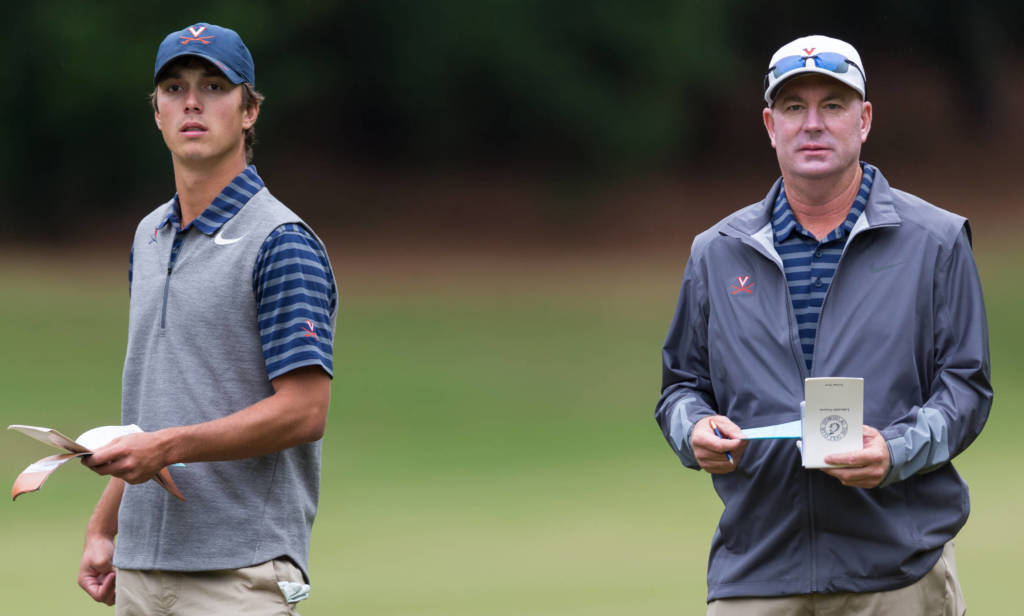 He was named the 2017 coach of the year by the Virginia State Golf Coaches Association. It marked the sixth time in his career to receive the honor.

In 2016, the Cavaliers advanced to the NCAA Championships, placing 22nd as Bard turned in a top-20 performance and later earned third-team All-America honors. Bard was joined on the All-ACC team by Stanger.

Bard was named to the Palmer Cup during the season and also competed as one of six amateur players at The Masters in addition to playing at the U.S. Open and U.S. Amateur Championships.

UVA placed 18th at the 2015 NCAA Championships and senior Denny McCarthy competed in the individual championships for the fourth time in his career. McCarthy, a three-time All-American, became the first player in UVA history to earn All-ACC honors all four seasons of their career.

The 2014 season was highlighted by three tournament titles, none more impressive that UVa’s record-setting showing at the Jim West Intercollegiate in McKiney, Texas. The Cavaliers shot 45-under 819 to run away with the tournament title. Virginia’s score was the second best against par ever by an ACC program. Playing on a TPC network course, the Hoos’ performance topped the school’s previous best scoring mark by 23 strokes.

Sargent witnessed Ben Rusch capture the 2012 ACC individual crown to become the first Cavalier to win the ACC championship since 1955. That same season McCarthy was named the ACC Freshman of the Year and senior Ben Kohles crushed the program’s all-time tournament scoring record, shooting 18-under 198 to win the Chris Schenkel Invitational.

Later that summer, Kohles, a collegiate All-American, drew the attention of the golf world when he won his first two professional tournaments on the Web.com tour and earned his PGA Tour card.

In 2011, Virginia won three tournaments, was the runner-up in two other events and participated in the NCAA East Regional. Kohles repeated as the ACC player of the year.

In 2010, UVA made its third consecutive appearance at the NCAA Championships, one of just 12 teams in the 30-squad field to accomplish that achievement. Virginia tied for 11th overall, just one stroke out of a playoff for the final berth in the event’s match play segment. The finish matched the best ever for a UVA squad at the national championships and was the best since regional qualifying was used to determine the championship field.

During the 2009-10 campaign, UVA placed in the top five in 11 of 13 tournaments and capped its season by being ranked No. 12 in the final Golfstat poll.

UVA was second at the ACC Championships, the team’s best showing since 1996, won the Cavalier Classic and saw Kohles, a sophomore, named the ACC’s co-player of the year. Kohles was later recognized as the sixth All-American in the program’s history.

His conference peers recognized Sargent’s achievements when they voted him the 2010 ACC Coach of the Year.

During the 2008-09, Sargent’s team used a strong showing in the spring to move on to postseason play. The Cavaliers won the Argonaut Invitational and placed second at both the Seminole Invitational and the Hootie @ Bulls Bay tournament. Seeded ninth in the 14-team field at the NCAA East Regional, the Cavaliers cruised to a fourth-place finish, earning their second straight trip to the NCAA Championships, placing 27th.

For his efforts, Sargent was recognized for the second consecutive year as the state of Virginia’s Golf Coach of the Year by his peers in the Commonwealth.

Sargent earned the honor a year earlier when the Cavaliers pulled off stunning rally at the 2008 NCAA East Regional Championships to return to the NCAAs for the first time under his watch.

When Sargent was named UVA’s head coach Aug. 31, 2004, he became the eighth person to direct the program in the last 30 years.

In Sargent’s first year at UVA, the Cavaliers qualified for the NCAA East Regional and placed 12th.

In 2006, the Cavaliers experienced some growing pains, failing to make a return trip to the NCAAs. Virginia picked up its first win under Sargent when the Cavaliers won the Mason Rudolph Intercollegiate. Senior Brad Tilley ended the year on a high note by taking medalist honors at the Cavalier Classic thanks to a dramatic six-hole playoff victory.

In 2007, Sargent saw sophomore Conrad Von Borsig earn All-ACC honors and the team finish the season on a positive note by winning the Cavalier Classic by a whopping 24 strokes.

In addition to returning to the NCAAs for the first time since 2000, the Cavaliers won the Palmas Del Mar Collegiate in Puerto Rico and the Cavalier Classic for the sixth time in the program’s history. The team saved its best performance for the NCAA East Regional when it made up a nine-stroke deficit and jumped from 16th to 10th on the final day of the tourney to grab the final berth to the NCAAs where UVA finished 26th.

Sargent took over the Cavalier program after working as an assistant coach at Tennessee for three seasons. He was intimately involved with the daily operations and recruiting efforts of the Volunteer program, In 2004, his last season at UT, Sargent became the second recipient of the Jan Strickland National Assistant Coach of the Year Award. Presented by the Golf Coaches Association of America, the award is given annually to the assistant coach who, among other things, has excelled in working with their student-athletes both on the course and in the classroom. That season he helped the Volunteers to three tournament wins and a No. 12 final national ranking.

Prior to coaching at Tennessee, Sargent was a professional golfer for nine years from 1992 to 2000. He is credited with eight professional victories. He has since regained his amateur status and annually competes in several area events. Sargent’s first coaching opportunity came at Vanderbilt when he worked as a volunteer assistant for the 1993-94 season.

A 1992 graduate of NC State, where he earned a bachelor’s degree in communications, Sargent was a two-time honorable mention All-American. He received the honor in 1988 after his freshman year and in 1991 when he was a junior. He received All-ACC honors in 1990 and 1991.

The Wolfpack team captain in 1991, Sargent helped NC State to a 14th-place finish at the NCAA Championships that season. The team also placed 14th during his junior campaign. He played at the NCAAs during all four of his seasons with the Wolfpack. The team was 18th in 1988 and 23rd in 1989. During his junior campaign NC State won its first ACC title.

An outstanding student, he was the recipient of NC State’s Tom Coffey Award for academic excellence during his senior season.