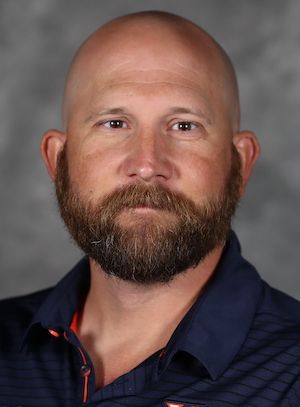 Jake Shrum returns to Virginia as an assistant coach for the 2022-23 season.

A Virginia swimming alum, Schrum most recently served as the head swimming and diving coach at Towson University. During his six years at the helm, he helped lead the Towson programs back near the top of the league standings, coached multiple athletes to All-America and Colonial Athletic Association honors.

He led the men’s program to its first-ever CAA Championship and was named CAA Men’s Swimming and Diving Coach of the Year in 2021. Shrum coached Brian Benzing to back-to-back CAA Men’s Swimmer of the Year honors. Under his tutelage, Benzing and Jack Saunderson earned All-America honors.

He helped lead the women’s program to its seventh-consecutive third-place finish at the CAA Championships in 2021-22 and earn numerous CAA and CSCAA weekly accolades.

Shrum has served as acting head coach for both programs since the fall of 2015.

Prior to being named acting head coach, Shrum served as an assistant coach for both the men’s and women’s programs. He joined the Tiger staff in May of 2015.

Shrum served as a volunteer assistant at Virginia. Prior to joining the staff at Virginia, Shrum served as head coach at Albermarle High School, a highly competitive Virginia high school league AAA school, for six years. He was responsible for the overall development and organization of the program, as well as the formation of the school’s diving team. He led the men’s team to three regional and five district championships, as well as a top finish of eighth-place at the Virginia State Championships. The women’s team won one regional and two district championships and had a top finish of sixth-place at the State Championships. In 2013, he was named Central Virginia High School Swimming Coach of the Year.

Shrum also served as an assistant coach for both the Virginia Gators club team and the Fairview Swim Club.

He is a U.S. Swimming certified coach which includes certifications in athlete protection, safety training and CPR.

Shrum earned a bachelor’s degree in computer science from Virginia in 2008. During his time at Virginia, he was a member of the Cavaliers’ swimming team. He was a four-time varsity letter winner and was a member of three ACC Championship teams.