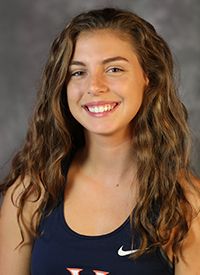 2021-22
• Co-Team Captain
• Second-team All-MASC selection
• Compiled a record of 12-5 for the Cavaliers
• Tallied victories over six top-10 opponents
• Went undefeated at MASC Championships
• Went 5-1 against MASC opponents
• Recorded wins over No. 3 Princeton’s Raneem El Torkey and No. 4 Columbia’s Ellie McVeigh at the CSA Team Championships
• Advanced to the quarterfinal of her bracket at the Holleran Cup (CSA Individual B Draw)
• Named the first CSA Player of the Month for November (12/6)
• Battled for a five-game victory at the No. 4 position at No. 3 Princeton
• Picked up a win at Position 4 in the 5-4 win against No. 8 Cornell (11/21)

2019-20
• Earned second-team All-America honors
• Qualified for the Ramesy Cup, the A division of the CSA Individual Championships
• Competed at the team’s No. 1 position throughout the season
• Recorded a 12-11 overall record, including winning two matches at the Ramesy Cup
• Won her matches at the Kurtz Cup against Middlebury and Dartmouth at the No. 1 position
• Named to the ACC Academic Honor Roll

Background
• Topped ranked junior player in Canada
• Played as Canada’s No. 1 at the 2017 World Junior Squash Championships in New Zealand in addition to being selected as the team’s flag bearer during the opening ceremonies
• Captured the national championship as the GU13, GU15, GU17 and GU19 levels
• Finished fifth with Prince Edward Island at the 2015 Canada Winter Games
• Placed second at Germany’s Pioneer Open in 2015
• Played at the 2015 and 2017 British Junior Open finishing 13th at the U17 level and 18th at the U19 level, respectively
• Captured the 2017 Canadian Junior Open title
• Three-time recipient of the Sport PEI Junior Female Athlete of the Year Award.