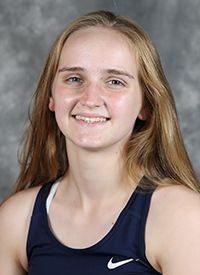 2021-22
• Second-team All-MASC Selection
• Compiled an overall record of 11-8 for the Cavaliers this season
• Ripped off eight-consecutive wins from Jan 23 – Feb. 25
• Tallied three wins against top-six opponents
• Went undefeated at the MASC Championships
• Advanced to the quarterfinal of her bracket at the Holleran Cup (CSA Individual B Draw)
• Won her match at Position 5 in four games in UVA’s upset win at Columbia (11/14)

2019-20
• Recorded an overall record of 12-8
• Finished the season playing at the No. 3 position for the Cavaliers
• Advanced to the consolation finals for the Holleran South, falling in the match in four games
• Recorded a win against Middlebury and Cornell in the team’s Kurtz Cup run
• Won her matchup against George Washington and Dickinson at the Mid-Atlantic Squash Championships
• Named UVA squash’s Rookie of the Year

Background
• Earned the Jim Mason Fair Play Award
• Advanced to the fourth round of the U.S. Junior U19 Open
• Finished fourth at the Canadian U23 Squash Championships and 2019 Canadian Junior Closed Championships

Personal
• Majoring in cognitive science with a minor in psychology
• Daughter of Joanne and Robert Maxwell
• Has one brother, Alex
• Mother, Joanne, played water polo at Queen’s University
• Competed in field hockey and softball in high school, earning MVP award