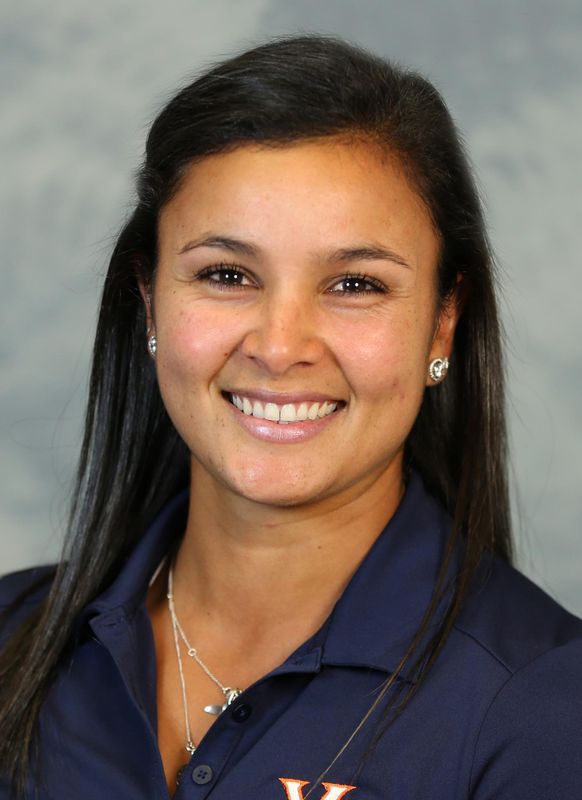 Gina Suarez-Malaguti, an All-American and the 2013 ACC Player of the Year, is in her fifth season with the Virginia women’s tennis program. Since joining the Cavaliers in 2017, she has twice been named the ITA Atlantic Region Assistant Coach of the Year.

In her fourth season with the program, she helped guide the Cavaliers to a top-10 ranking, reaching as high as No. 8, and a spot in the Round of 16 of the NCAA Championship. UVA players earned six All-America honors, including the first four players in program history to reach the quarterfinals of the doubles championship, with senior Rosie Johanson and freshman Emma Navarro making the semifinals. Suarez-Malaguti was on court when Navarro captured the NCAA Singles title.

In her third season with the program, Suarez-Malaguti helped the program to a season-high ranking of ninth in the Oracle/ITA Rankings as the team went 10-5 in a shortened season that saw 11 matches against top-25 competition with six victories against those foes. Included in those matches was a win at No. 3 NC State, only the program’s fifth over a top-five team and the first since the 2015-16 season. She helped coach freshman Natasha Subhash to a top-10 singles ranking and the singles title at the ITA Atlantic Regional. Subhash also advanced to the semifinals of the Oracle/ITA Masters.

In her second season with the program, she helped lead the Cavaliers to an 18-9 record on the way to the second round of the NCAA Tournament. Meghan Kelley earned All-ACC First Team honors and a berth in the NCAA singles championship, while Kelley and Sofia Munera earned a berth in the NCAA doubles championship. Both players were named to the ACC Women’s Tennis All-Academic Team, while five players were named ITA Scholar-Athletes. She was named the ITA Atlantic Region Assistant Coach of the Year.

In her first season with the program (2017-18), she helped the Cavaliers to an impressive turnaround as she took Virginia back to the NCAA Tournament for the 18th time in program history. Virginia advanced to the second round of the tournament and posted a 16-9 record with the same roster that missed the post-season the year before her arrival. She also coached Rosie Johanson and Meghan Kelley to All-ACC honors. Johanson was selected to compete in the NCAA Singles Championships, while Kelley and Johanson were selected as a pair to compete in the NCAA Doubles Championship.

Suarez-Malaguti joined the Cavalier coaching staff after spending the previous three seasons as an assistant coach at NC State where she helped the Wolfpack sign back-to-back top 25 recruiting classes in 2015 and 2016.

In her three seasons at NC State, Suarez-Malaguti helped build the program as the Wolfpack completed the best season in school history in 2017. Last year, NC State reached the highest ranking in school history at No. 16 in the Oracle/ITA Team Rankings and a final ranking of No. 26.  Suarez-Malaguti also helped the Wolfpack advance a doubles team into the Round of 16 at the NCAA championships.

Prior to joining the staff at NC State, Suarez-Malaguti spent the 2014 season as an assistant coach at Maryland. That season, she helped the Terrapins break back into the national rankings for the first time in two years.

A four-year letter winner at North Carolina from 2010-13 while O’Leary was an assistant coach, Suarez-Malaguti earned All-America honors as a senior and she was named the 2013 ACC Player of the Year. She was also named the ITA Regional Player of the Year that season, as she maintained a top 10 national ranking in singles the entire year and reached a season-best ranking of No. 4. Suarez-Malaguti played the top spot in the singles lineup in 2013 and helped the Tar Heels advance to the Elite Eight at the NCAA championships and capture the ITA National Team Indoor Championship.

Suarez-Malaguti played a part in North Carolina’s ACC regular-season championship in 2010 and runner-up finish in the ACC championships. During her sophomore season, the Tar Heels captured the ACC Championship and reached the national semifinals at the NCAA championships.